10-men Goa hold on for a point against Kerala: 5 Talking Points and Player Ratings 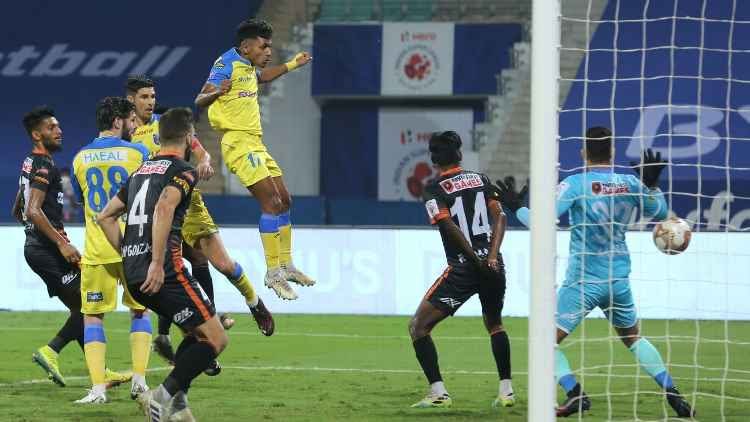 The resurgent Kerala Blasters settled for a draw against high-flying FC Goa at the Bambolim on Saturday night football action. The Goan club were reduced to 10-men, but scored the very first goal of the game from the set-piece. While, Rahul KP’s header equalised the scoreline in the second-half.

A positive result for both sides would have helped them for the title race. However, Kerala Blasters move up the table and are just behind Csaba Laszlo’s Chennaiyin FC. While, FC Goa remain at the third position with 20 points from thirteen games. Let’s take a look at the five talking points from this encounter.

FC Goa were pressing Blasters’ defense from the start, while Kibu’s side were happy to sit back and defend in the first-half. Goans did test Albino Gomes couple of times early in the first-half, but Albino made sure he didn’t make any silly mistakes.

Juan’s side got an opportunity in the 25th minute in form of free-kick. Former Atletico Madrid B forward took the responsibility and made no mistake to put it across the goal.

Albino Gomes had to stop the shot coming-in from left, which took a deflection from Sahal Abdul Samad. The goal gave confidence for Goans to penetrate more in to Kerala defense.

The Argentine attacker returned to the side after missing last game against Bengaluru FC. Jordan Murray, who limped off by the end of first-half in the Southern derby missed this contest with injury. While, Goa also had number of blows due to injuries.

Facundo had good impact in the game, especially from set-pieces with his sharp crosses. Blasters couldn’t make use of the chances up-front with Hooper, not in greatest of form. However, Rahul KP finally connected Facundo’s whipping cross in to the box from corner to equalise.

The youngster has been in terrific form infront of the goal for Kerala Blasters. Rahul KP once again raises up to the occasion, when is club needed him. The Kerala forward beautifully guided the ball in to the net past Naveen Kumar. He has three goals to his name this term in eleven appearances.

Argentine attacker Facundo delivered a wonderful cross in to the box and Rahul KP had a free header to equalize the scoreline in the second-half. Facundo Pereyra delivered a similar ball in the first-half, which was guided in to the net by Bakary Kone, but was later disallowed due to hand ball.

The experienced English forward’s struggling form in front of goal continues. Hooper has two goals and three assists so far this season in ISL. However, the striker hasn’t optimised all the chances for the Blasters, which is a big worry.

However, Murray’s effort is balancing Hooper’s shady performance. Hooper had number of open chances at goal with keeper out, but the striker wasn’t able to convert and squandered the chances. It could have made a big difference in the game and Blasters could’ve climbed a spot higher in table as well.

After Rahul KP’s goal, Kerala gained momentum and Gaurs suddenly found themselves on the backfoot. To add on to that pressure, Ivan Gonzalez was sent-off with red card.

Gonzalez was initially cautioned for his tackle on Gary Hooper. Then the referee flashed the second yellow after Gonzalez touched him while protesting.

The decision made a big impact in the game as Goa were forced to defend in the final quarter of the game as Kerala tried to take advantage of the extra man. This suspension will force Juan to an Indian defensive line-up with Adil Khan gearing up for a chance.

134 thoughts on “10-men Goa hold on for a point against Kerala: 5 Talking Points and Player Ratings”