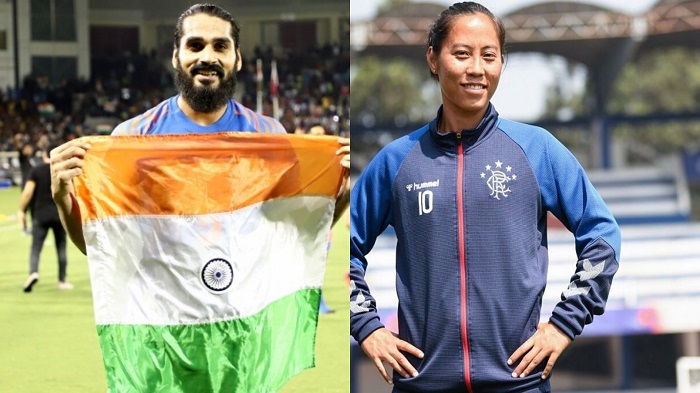 The All India Football Federation (AIFF) has nominated Sandesh Jhingan and Bala Devi for the Arjuna Award. The AIFF general secretary Kushal Das said that their names were forwarded to the Ministry of Sports to reward their achievements as well as consistent showing in the recent years.

Bala Devi, who has been the talk of town being the first women’s footballer to sign a professional contract with Scottish Giants, Rangers FC, is currently in Glasgow with India closing its airspace for international flights due to the on-going pandemic.

The 30-year-old has been a torchbearer for Women’s football, being the top scorer for India with 52 goals from 58 games, she is also the top international goal scorer in the South Asian region. Starting her career at the young age of 15, she has been extremely prolific playing both for the country as well as various clubs at the domestic level. She has scored over 100 goals in 120 games and is the current top scorer in the Indian Women’s League having played just three seasons out of the total four seasons so far.

Bala’s impressive showing caught the attention of Rangers FC who signed her in January this year, and since then she has made three appearances for the side and also chipped in with an assist before the COVID-19 pandemic brought the tournament to an abrupt halt.

For the other fellow nominee Sandesh Jhingan meanwhile, the lockdown period with football being cancelled all round has given him plenty of time to recover from an ACL injury that he picked up during the practice game ahead of the 2022 FIFA World Cup qualifier in October 2019. An injury that not only kept the centre-back away from the crucial World Cup qualifiers but also from turning up for his club Kerala Blasters for the whole of 2019-20 season.

A presence his team definitely missed owing to his solid presence in the defence and being a leader on the field. Having made his debut for the Blasters in their second-ever match in 2014, he has never looked back and has grown from strength to strength to become an indispensable part of the Kerala outfit, and a fan favourite. For the Indian team as well, he made his debut in 2015 and has been a vital cog in the defence. His last game was the much-celebrated draw against Qatar in the 2022 FIFA World Cup Qualifiers were a defensive masterclass along with an all-round effort led to a draw against Qatar. Known as someone who does not shy away from putting his body on the line for the team, the Emerging player of the Season winner for both ISL and AIFF in 2014 has come a long way and is now is easily the best defenders in the country.

Both Jhingan and Bala Devi find their name among several other equally illustrious achievers, the nominations will be scrutinised on a later date and the winner will be presented with a cash prize of 5 lakh rupees and a Bronze statue of Arjuna and a scroll.