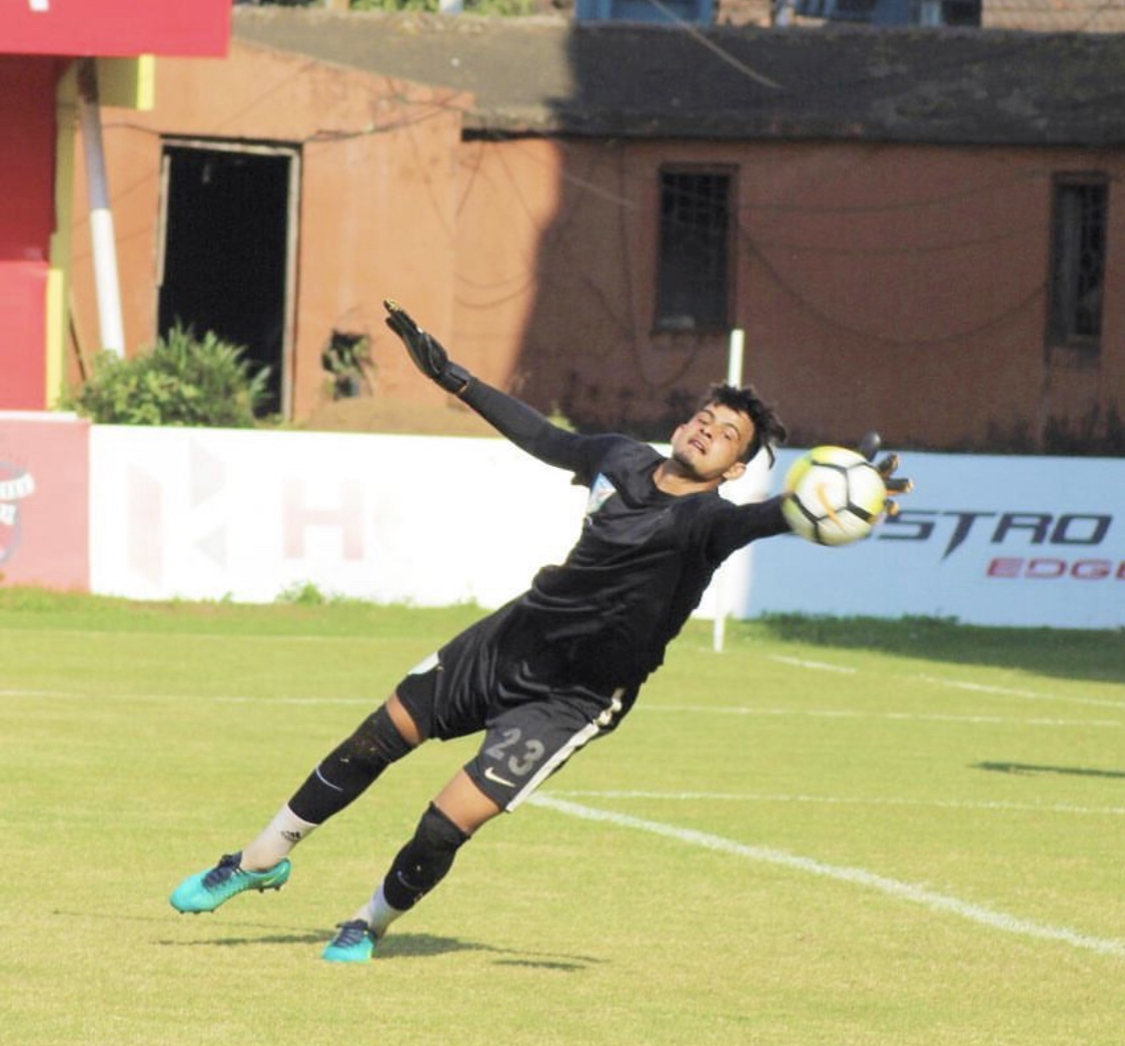 Lara Sharma comes from the state of Punjab which has produced so many talented Indian Goalkeepers like Gurpreet Singh Sandhu, Amrinder Singh, Ravi Kumar, Lovepreet Singh and Prabhsukhan Singh Gill, to name a few. He was trained by his father during childhood and has idolized Pawan Kumar and Gurpreet Singh Sandhu all his life.

He is part of the next generation of talented Indian Goalkeepers who are trained with modern goalkeeping philosophy and high class practice adopted throughout the footballing world. In his young career so far he has donned the jerseys of Tata Football Academy, India Arrows and ATK at domestic level and India U-19 at International level. He is now ready to play at the highest level and dreams about representing India in future.

Lara Sharma spoke to Football India exclusively about his playing career and life as a Goalkeeper. Read the full conversation below:

At what age you thought of becoming a goalkeeper and why?
It all started at the age of 11. It is because of Pawan Kumar & Gurpreet Singh Sandhu. I have watched them play and they are my inspiration. I always wanted to become a good goalkeeper like them.

How important is it to take responsibility of defense for a Goalkeeper?
Yes, it is very important for a goalkeeper to organise the defense in the game. Goalkeepers can see everything from behind, so it is my duty to take responsibility for my team and understand what is going wrong or right because as a goalkeeper I can see everything from behind and understand the defense.

How was the experience playing in Calcutta Football League and I-League 2nd division?
I learned a lot from the Calcutta Football League. It was a very good experience for me to play in difficult conditions like muddy grounds etc. All the clubs wanted to be on the top, so it was a very tough fight as none of them want to give up! As soon as the CFL got over, the 2nd division started, so it was good for me to play more matches. In the I-league second division, there are good young talented players and some clubs plays with foreign strikers also. So, it was very good experience playing with some good quality and as well as talented players. Also, every team was fighting for the chance to get promoted, so it was very good experience to play against those type of clubs.

In last 5 years what changes you observed in regard to Goalkeeper training?
Starting from the TFA, I have learned a lot and I am still learning. I learned all my basics from TFA which still help me. Goalkeeping coach Subrata Das Gupta helped me a lot. Then as I got selected to the U-19 National squad, goalkeeping coach Yusuf Ansari helped me a lot, he taught me everything related to match experience. After a year when I joined the Indian Arrows side, he was there, which was very helpful for me. Then when I joined ATK, goalkeeping coach Abhijit Mondal who is a very experienced coach and has helped me a lot. Each team and every player play with different techniques and set pieces, he tells me how my approach has to be for those. He gave me that experience which I have now and I am still following what he has told me, which I know will better me always. After the first year with ATK reserves I was with the senior team also, goalkeeping coach Javier Pindado was there. To be very honest, the first 2 weeks of training was tough. I went through some training routines which I have not done before. Slowly, I got used to his training and everything which he wanted from me. I knew it was a small beginning for my future and I learned a lot.

Are you looking to being loaned out in search of regular football or you want to fight for a place in senior team?
To be honest for a goalkeeper, it is never easy to not play. If I do get an opportunity at a good club where I can play regularly, I will go there. I have a good opportunity at ATK to stay and fight for a spot but if I do end up getting something better, I definitely want to go and play elsewhere because when you’re young, you want to be playing as many matches as possible.

What’s your worst and best football memory so far?
My worst memory in football was getting injured in ATK while playing the Calcutta Football League. I got injured in my jaw. I was going though a very good daily routine and highly concentrated on the upcoming matches, but when I got injured, I was out of the field for 15 days.
My best memory was getting called up for the U-19 SAFF championship. When I got a call, I was so happy and can’t express how I felt during that moment.

Where do you see yourself in 5 years from now?
I just want to represent my country and play for them one day. My dream continues to be able to play outside India some day.