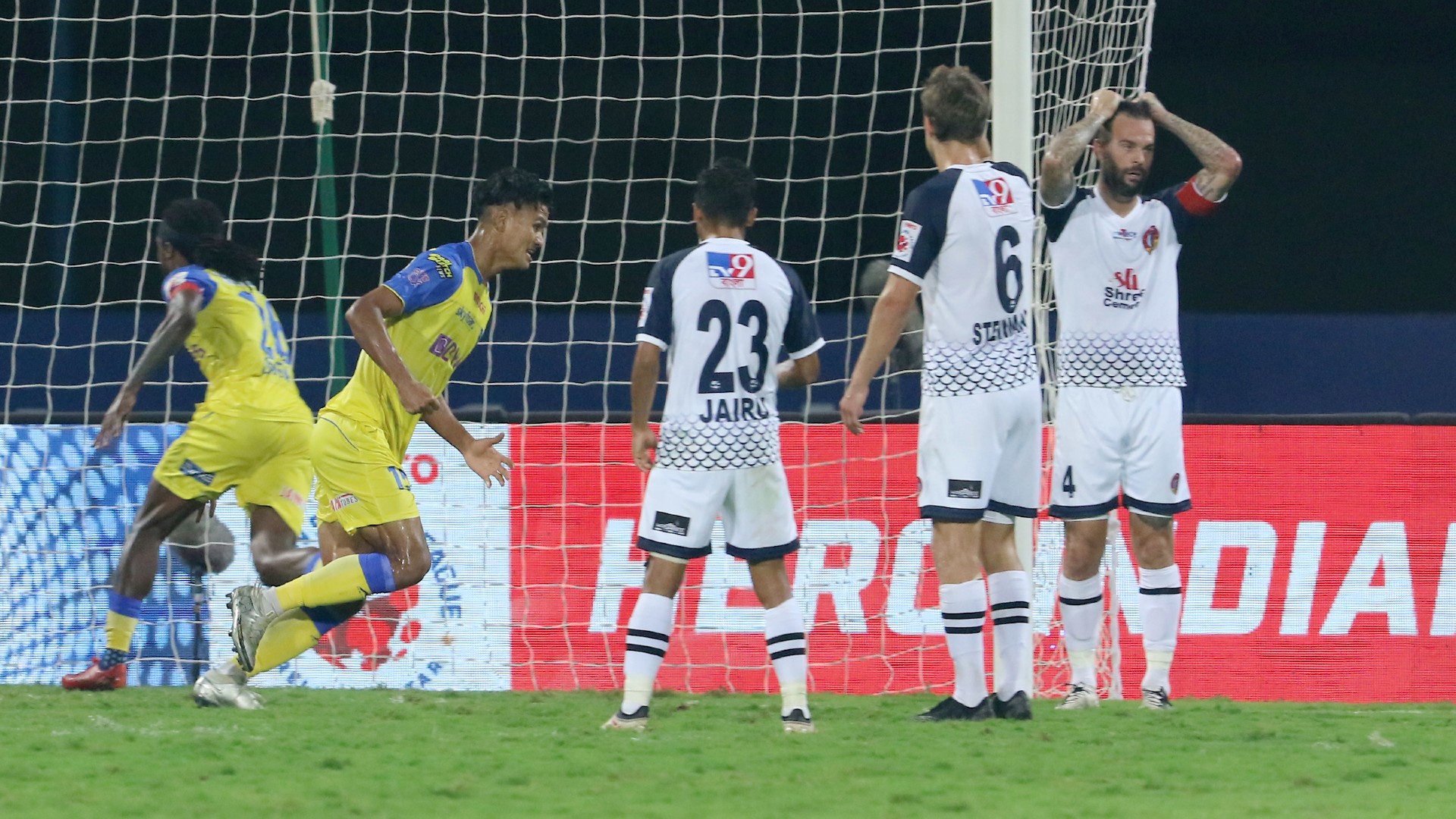 Forgetting the extremes of the defenders, SC East Bengal could not win even from ahead. The red-and-yellow camp was once on the lookout for the first victory in the ISL against the Kerala Blasters on Sunday. In added time (95th minute) Saxon’s cross from the corner was converted by a header and instead Jackson Singh poured water on the red-yellow dream of victory. East Bengal rose to number ten with 2 points in 6 matches. Kerala is at number nine with 3 points in the same number of matches. For now, the victory is elusive for both the teams.

Both teams were desperate from the start to achieve the desired victory. East Bengal coach Robbie Fowler led the team to a 3-5-2 formation with a double attacker in front. Play five midfielders to perform wing play as well as blocking and snatching in midfield. Attacks and counter-attacks froze the game. Red-yellow got the first chance in 9 minutes. Kerala goalkeeper Albino Gomes saved an impeccable shot from the left side of the box by Haobam Singh

Three minutes later, on the other hand, Kerala stopper Bakari Kon came out of the defense and went out over the goal head post. The defense of the two teams is shaky. In the 13th minute, Bakari’s suicide goal gave East Bengal the lead. Before that, Rafiq entered the box through Maghoma and deducted. Going to clear it, Kerala defender wrapped the ball in their own net (1-0). However, Rafiq could have finished with his right foot shot without a minus. In fact, self-confidence, which is when perfection decreases. In the next minute, there was no one to touch the foot in the minus that Pilkington entered the box through Maghoma. The red-yellow British coach is changing the first XI in every match. He is completely confused with footballers. He is still experimenting. However, there is no good quality play-maker or striker in this East Bengal. On this day, Maghoma penetrated from a little deep and tried to keep the attack moving.

After the break, the Vikuna team was desperate to pick up the goal from the set piece. Vicente Gomez could not use the opportunity to score two goals from the corner. In the 82nd minute, Albino saved Rafiq’s right foot shot by jumping to the left. Then Steinman’s goal-scoring header hit the opponent’s defender’s foot and missed the target. In the 8th minute, Sahal missed the goal instead of Kerala. Devjit saved Jordan Marr’s shot in the 62nd minute. Maghoma failed to score even after getting the goal open in the 6th minute.However, in the last 20 minutes, Kibu Vikuna’s team took advantage of the attack in the last minute. Kerala saved 1-0 in the added time with a goal by Jackson. Kerala now has 3 points in 6 matches. 2 points in the pocket of SC East Bengal in the same number of matches.

The winning match went out of the hands of SC East Bengal. They were ahead in the allotted 90 minutes. However, in the fifth minute of injury time, 19-year-old Jackson Singh’s strong header equalized the Kerala Blasters.This time 6 matches were played in ISL. But Robbie Fowler’s SC East Bengal has not seen the face of victory yet.
Former Indian Player Mehtab Hossain analyzes:
We may blame the defender. But Sahal could not center so easily if there was someone there to win the second ball. I don’t know what the coaching staff is doing. I can’t find any language to explain this mistake.There are still 14 matches left. I will tell the coach not to make any controversial statement, not to make any comment against the young boys of the team. This is the only medicine of the team.

Upon Conclusion East Bengal Die Hards can say, On Sunday, it seemed that 3 points were finally coming. SC East Bengal also reached the point of increasing the gap several times. But the number of goals did not increase. At least twice, they had to come back from a convincing goal.SC East Bengal went ahead in the 13th minute of the first half. Kerala’s Bakari Kon’s body was caught in the net. The red-yellow camp made it 1-0 with a suicide goal. That was the score at the break.Kerala started attacking, again and again, to score in the second half. SC East Bengal goalkeeper Devjit Majumdar was then shown impenetrable. He became ‘Savjit’. Opportunity for counter-attack also comes to SC East Bengal. ,But it could not be used. So still They have to say ” A Goal is not Enough”