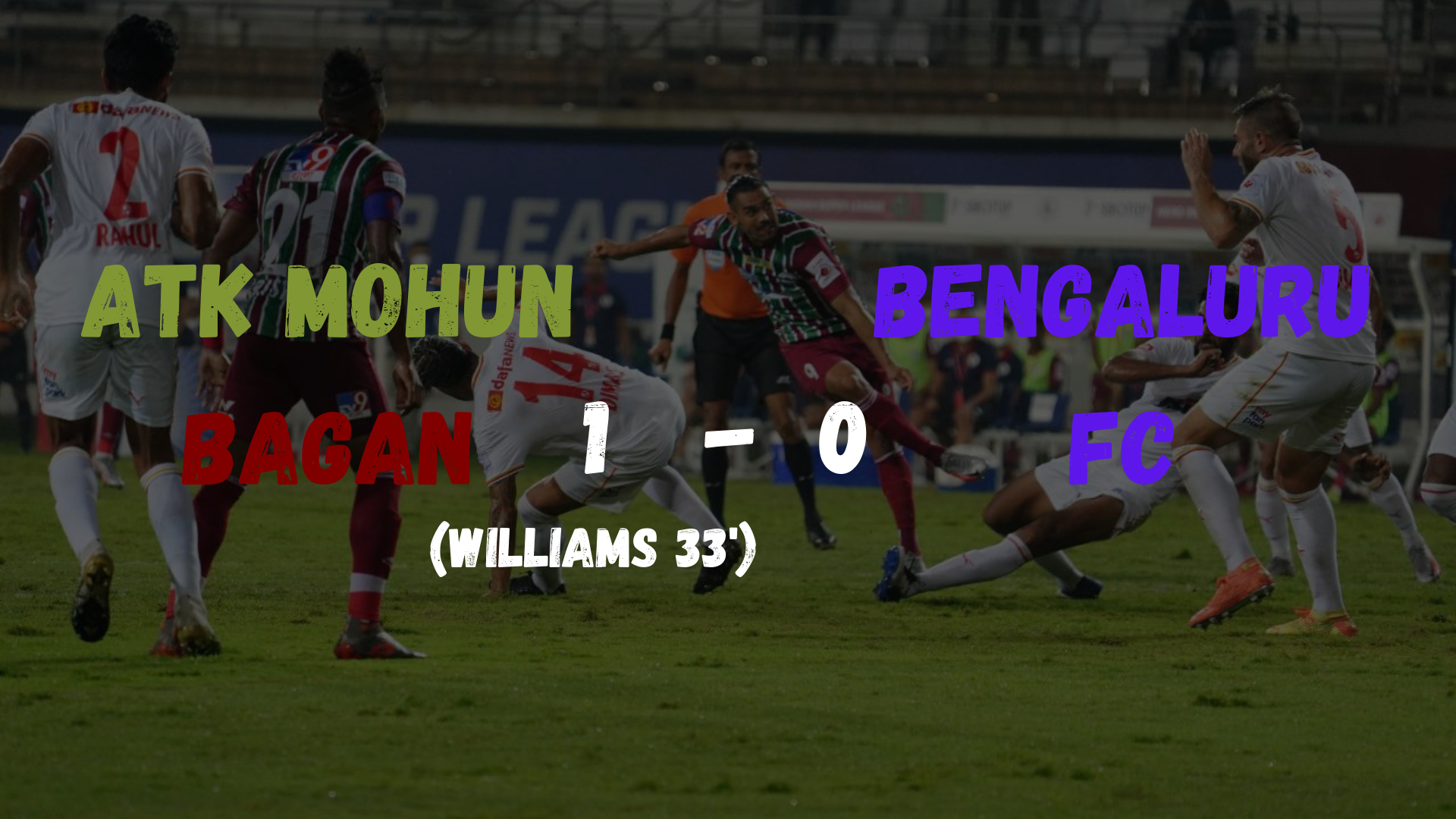 ATK Mohun Bagan ended Bengaluru’s FC unbeaten run in Hero ISL 2020-21. They retained their place in the table with points tied with the Islanders.

ATK Mohun Bagan started the game with the same intensity, where they left off against FC Goa. Habas outplayed the opponents with his philosophy once again to take his record to three wins out of five games against Bengaluru FC. He started with the same formation as his last game, a 5-4-1 to counter the tactical possession play of Carles Cuadrat.

Arindam – 7.0: He kept another clean sheet and was not troubled much tonight by Bengaluru’s attack. He did had to come out on a few occasions to make some saves.

Tiri – 7.5: A very consistent performance from this man, who managed to keep Clieton Silva particularly from showcasing his skills.

Jhingan – 7.5: Good headers, tackles and a comfortable play from the Indian international. He has developed a good partnership with Tiri and McHugh in the heart of the defense.

McHugh – 8.0: A stellar performance once again from this man, without whom maybe ATK Mohun Bagan would not have managed to keep attacks at bay. He delivered the perfect ball for Williams, who scored the only goal of the match.

Subhasish – 7.5: An amazing night for the ex-Mumbai City FC player. Delivered the balls a few times for the attack in the box, defended well too.

Pritam Kotal – 7.0: Helped his team to get through Bengaluru FC’s attack, who have scored the most goals this season on a tie with Mumbai.

Pronay Halder – 7.5: He covered a significant amount of area for the team to keep the pressure building. Few good through passes, both aerially and grounded were seen from him.

Edu Garcia – 7.5: Proved why he deserves to be on the pitch. His creativity and ability of vision makes him an exceptional player in the team.

Manvir – 7.5: This young Indian lad is surely having his best season this time. He has been one of the consistent players who have started the game. He made erratic runs forwards, dropped deep and did even had some scoring chances he could have capitalized upon.

Williams – 8.0: His ability to finish the game from sublime finishes has surely made him an important marksmen around the opposition penalty box. He helped keep up the pressure alongside Manvir and Krishna.

Krishna – 7.5: Even though he did not get a goal tonight, he contributed a lot more than that. The most important of them were building plays for his team and shielding the ball, to let his team take the shape for an effective attack.

Bengaluru FC didn’t started the match the way coach had expected. They looked as a confused team and were not able to execute their plan. Besides, they started with an expected 4-3-3 but Suresh was missing from the squad which certainly had an impact in the match.

Gurpreet – 7.0: He made some good saves to keep Williams, Krishna, Edu Garcia and Manvir out from scoring. But, the effort was not enough for a powerful strike in the half an hour mark from Williams.

Juanan – 7.0: He had a decent game. He put there good tackles but unfortunately conceded a goal early in the first half.

Pratik – 6.5: Was nowhere to be praised of for his performance. He should perform better in coming fixtures as Ashique would be out for a while now.

Bheke – 7.0: Not enough efforts from him and the team. He was forced to play at the left-back to fill in for injured Kuruniyan.

Khabra – 7.0: He was nowhere to be seen, as compared to his performances in his last few games. He barely put a cross tonight.

Paartalu – 7.0: Not a night for this man. Though he made good contact with the ball initially to get a goal or two, not much seen from him today.

Dimas – 6.5: Probably the worst match for him this season. An absolute no show on the field from him. ATK Mohun Bagan managed to keep Bengaluru’s most creative player silent tonight.

Cleiton Silva – 6.5: He just tried to win some freekicks and fouls in and around the opposition’s box.

Chhetri – 6.5: Certainly not a match to remember for the Indian captain.

Deshorn – 7.0: He managed to get some goals through headers but was unsuccessful tonight.

Udanta – 6.5: He was trusted to deliver tonight but was a disappointing game from this young man.

ATK Mohun Bagan started to sniff around Bengaluru’s box very early. They continued with their high pressing game, as they did against FC Goa. Habas started with the same formation of 5-4-1 but surprisingly, it changed to more of a 4-5-1 on the field with McHugh playing in the midfield when ATK Mohun Bagan had the possession of the ball. They pressed and defended as a unit and as a team.

Whenever Bengaluru had the ball, ATK MB’s pressing was led by Krishna, followed by Manvir on the right and Williams on the left. They three have been very effective in closing the options for Dimas particularly, who did loose the possession on several occasions. Edu Garcia looked up and fed the ball directly to either of the three upfront. Pronay Halder and McHugh did assist them whenever needed.

GOAL: ATK Mohun Bagan 1-0 Bengaluru FC: It all started in the 32′ when Gurpreet took the goalkick. The ball was passed on to ATK Mohun Bagan, who managed to get it to McHugh, who was there around the half-line. He fed an inch perfect aerial ball to Williams on the left flank, who had a smooth first touch, only to strike it on the right top-corner to make it unreachable by Bengaluru’s giant goalie Gurpreet.

ATK Mohun Bagan retain their second position in the table, keeping another clean sheet to their name. They are currently tied with Mumbai City FC on points, only second to them on goal difference.

Bengaluru FC remain third after the loss, and will look to bounce back in their next game against Jamshedpur.