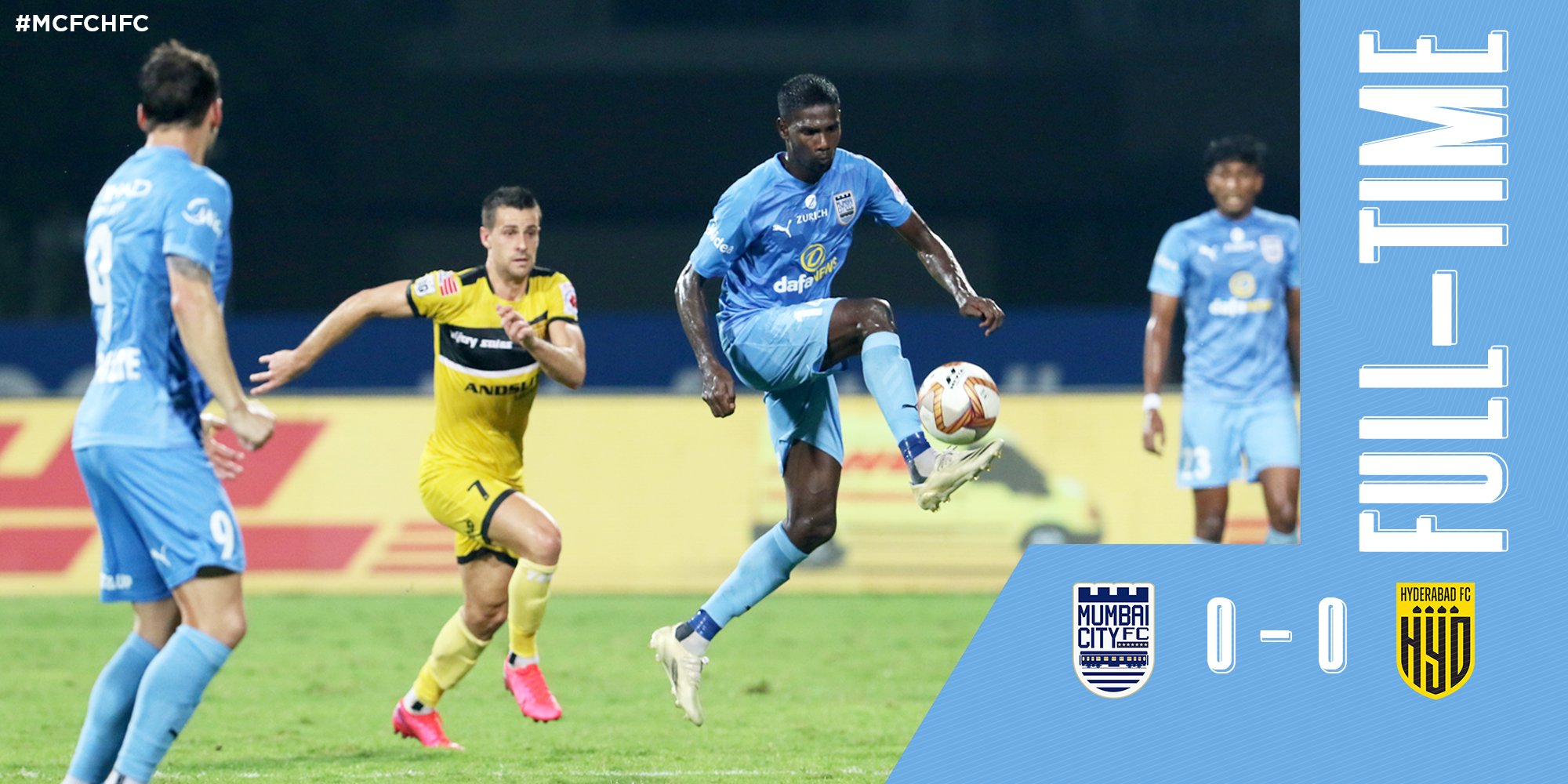 Mumbai City FC were denied the opportunity to take three points against a well organized Hyderabad FC. There were a number of opportunities created from both the sides. But, none were able to find the back of the net.

LINEUP, RATING and STYLE OF PLAY

Amrinder kept his place in the starting eleven. He also kept his seventh clean sheet of the season. There was even a chance where Mumbai could have trailed by a goal. But, Amrinder managed to save the opportunity where Hyderabad could have led. Hernan and Fall started for the fourth straight time. Mandar and Amey have retained their place, looking as if Lobera has had his choice of fullbacks. Jahouh was back after the suspension and started at the defensive midfield along with Borges. Boumous was missing with a minor ankle injury, so was replaced with Raynier in his position. Cy Goodard and Bipin Singh were placed at the flanks. Le Fondre was rotated once again in the place of Ogbeche.

Mumbai City FC had to taste the early attack of Hyderabad. Mumbai probably missed the services of Hugo Boumous. Even though Jahouh was back, the team missed Hugo. Mumbai attacked with composure and comfort. The defense was a bit leaky, as they gave away chances for Hyderabad, who if could have capitalized would have went home with the three points. Even Mumbai had their chances, but none were as clear cut opportunities as were created by Hyderabad. To fill in the absence of threat Hugo posses at the field, Lobera even brought in Ogbeche in place of Cy and Vignesh in place of Bipin. None were successful to cause problems for the visitors.

Manuel Roca kept his defensive unit of Kattimani, Odei, Sana, Akash Mishra and Asish Rai the same as he has done the majority of the matches. He started with a 4-4-2 in place of his usual 4-2-3-1. The two strikers did create problems, but the wingers, Liston and Yasir actually ran riots to cause problems for Mumbai’s defense. Hitesh Sharma and Sastre did well in the middle of the park. Aridane was a bit off his form tonight and Chianese participated well in the team’s buildup.

Hyderabad started with the attack from the first minute of the match. They played with high pressing up the field, keeping Mumbai in the pressure. This did saw Mumbai loosing a couple of balls, which Hyderabad could have capitalized. The full backs, Mishra and Rai were exceptional both attackingly and defensively. Hitesh Sharma was rock solid in the middle. The back four played a very disciplined tactical game, to not allow Mumbai play from the middle. They forced Mumbai to switch flanks, rather than allowing them to go through the middle. They even set traps for Mumbai, which once again were not utilized.

The game started in the favour of Hyderabad, as Mumbai failed to dominate the way they usually do. There were plenty of chances for both teams to score, with Hyderabad having a slight edge but no goals were scored in this encounter. Hyderabad played genuinely well specially defensively. The Nizam’s attack also caused problems for Lobera and his blue army. Mumbai even gave away the ball on several occasions, but Amrinder kept his composure solid between the posts, to deny Hyderabad’s attack from finding the back of the net.

Hyderabad FC are two points clear at the fourth position from Chennaiyin FC who are placed at the fifth. Mumbai extend their lead to six points, having ATK Mohun Bagan sit a place below them with a game in hand. ATK Mohun Bagan face FC Goa as visitors tomorrow and the Mariners will look to close down the gap.