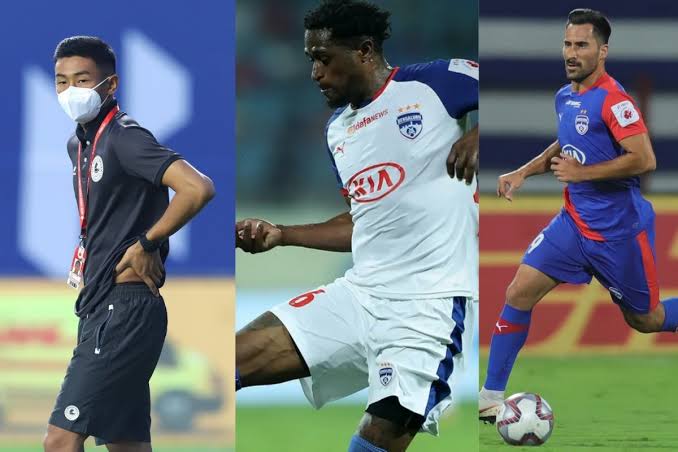 The Indian clubs have been busy in the January transfer window as they look to make that final push in the second half of the season. The season is in full swing and it’s time for clubs to make needed changes to their squad.

Now’s the right time for Indian clubs to sign the players of their caliber for the glory. Some sides have been consistent, while some are struggling with injury concerns in their squad.

Let’s take a look at the done deals  in the second and third week of the January transfer window:

The 30-year-old Jamaican centre-forward signs in favor of Northeast United as Appiah’s replacement untill end of the season from Benglauru FC. Deshorn Brown was having tough time at Bengaluru FC, unable to convert open chances for the Blues. However, he has one assist to his name so far this season for the club from Bengaluru.

Bengaluru FC parted ways with Deshorn Brown and he’ll now ply his trade for the Highlanders. The Blues have Norwegian striker Kristian Opseth for the centre-forward position, who is yet to find the net this term. Bengaluru did similar kind of transfer with Manuel Onwu last winter, who had a good time with Odisha FC in front of goal.

Xisco Hernandez has good rapport with the club, which can help change for the Blues. Bengaluru FC’s current run of form is disappointing and fans are expecting for a change with Xisco in the middle. The Spaniard has six goals and seven assists to his name in ISL.

FC Goa signs Dheeraj Singh from ATK Mohun Bagan on a three-and-a-half-year deal. The shot-stopper will be with the Gaur’s untill the summer of 2024. The Gaurs have made a good investment on the youngster, who has good potential to develop in to a star.

The 20-year-old shot-stopper didn’t get the regular game time with ATK Mohun Bagan under Antonio Habas. Arindam has been brilliant so far, for the Mariners and no wonder he was on bench. However, Avilash Paul is the second-choice goalie at the club next to Arindam.

Two-time ISL Champions Chennaiyin FC have found a perfect replacement for their injured skipper Rafael Crivellaro. The Brazilian is ruled out of the season, after a rush tackle from Pranoy Halder. However, the management has gone for the right choice to land experienced Spanish playmaker Manu Lanzarote.

Former FC Goa star will don Chennaiyin jersey untill end of the season. The seasoned professional will be available for Chennaiyin FC by January 31 due to COVID-19 protocols. The veteran attacker has 19 goals and eight assists in the Hero ISL. The fans are excited to watch him play for the Supermachans.

Nawaz set to join the Nizams

FC Goa shot-stopper Mohammad Nawaz is on his way to Hyderabad FC. The Guars have roped-in Dheeraj Singh on a long-term deal, which paves way for Nawaz to join the Nizams. The 20-year-old goalkeeper hasn’t been at his best for the Goan club this term.

He has managed a single clean sheet in ten games and allowed eleven goals past him. While, Naveen Kumar did a exceptional job for Juan Ferrando’s side against Jamshedpur and got a clean sheet to his name as well. It’ll be interesting whether the Spanish manager will go for Naveen Kumar or Dheeraj Singh in the coming games.

Ajay Chhetri has made just four appearances in Indian Super League till date. The youngster is promising and will be hoping for more game time with SC East Bengal under Robbie Fowler. The lad also got a chance on his debut for East Bengal against Kerala Blasters.