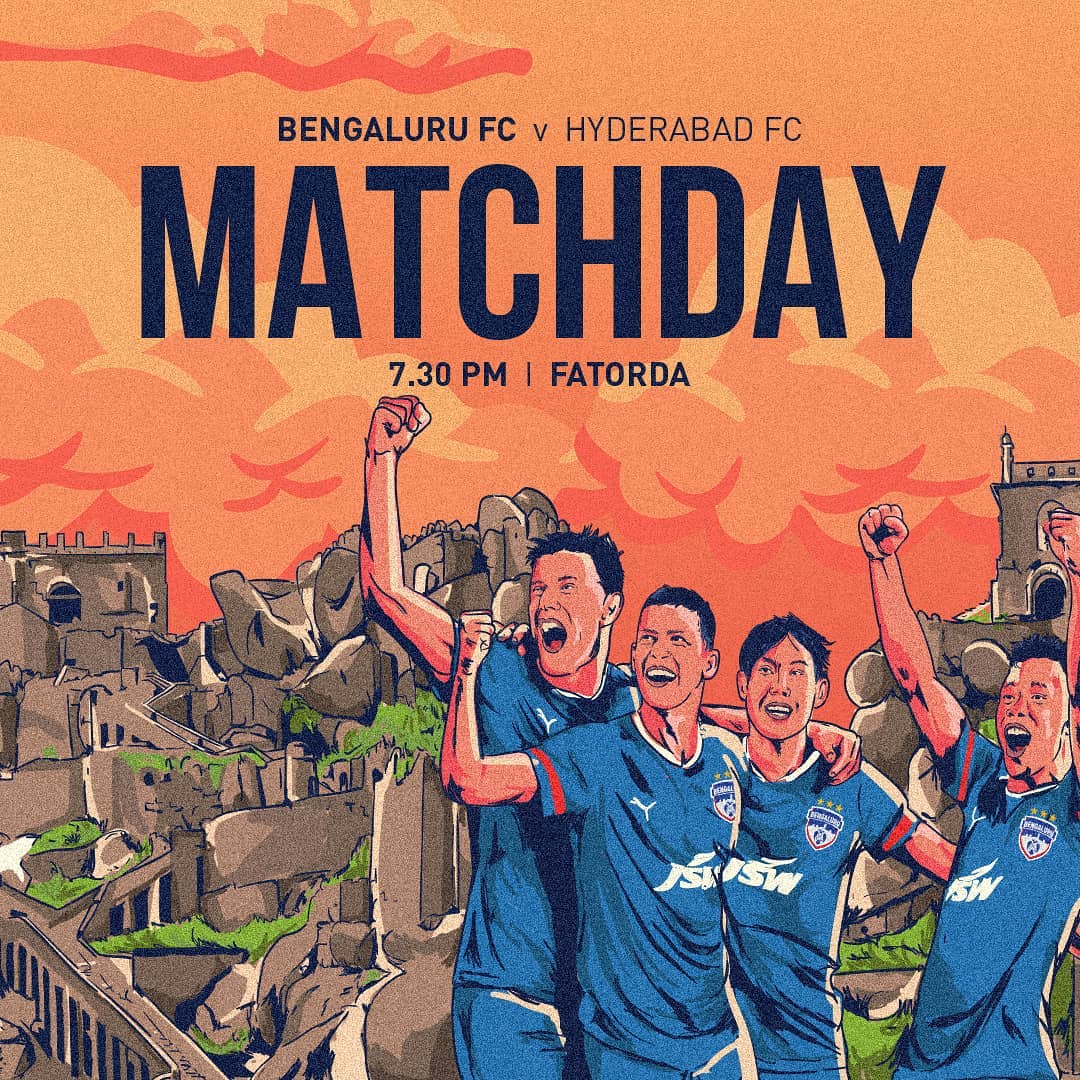 GK – Subrata Paul 7: Didn’t face many shots, only faced one shot which he parried away, overall had a good and composed game. Did one splendid clearance from an attacking Hyderabad FC player.

LB – Akash Mishra 6.5: Hyderabad FC had pushed their fullbacks forward in the midfield position to keep the attack fuelling and keep possession. Akash had a solid game, playing in short spaces and making forward runs, in which he would get caught out but managed well to defend it. Created one chance for a goal.

CB – Chingelsana Singh 7.4: Chinglensana Singh who only had two appearances last season, today started the game for Hyderabad FC and played a sublime 90 minutes. He had the highest touches in the game with 77 touches. His positioning was the most crucial part of his game today.

CB – Odei Onaindia 6.7: Odei had a good decent matchup against Bengaluru FC. He was quite composed and well versed with his CB Chinglesana Singh. Odei had precisely 3 important clearances throughout the game.

RB – Asish Rai 8: My man of the match was the young right-back who not only had the best stats defensive stats but also great offensive stats, where he created one chance on goal, played one cross. He was also good at tackling and interceptions. He had a few misplaced passes here and there.

CM – Luis Sastre 6.3: Luis is the pinger in the game, he plays the best passes and makes spaces for other players. He has a good vision.

RW – Nikhil Poojary 6.2: Nikhil had an average game and was a constant energy source to HFC. He dribbled and took the game forward every time he got the ball but failed to make an impact – misplaced passes, unsuccessful dribbles got him failing in the final third.

AM – Joel Chianese 7.6: Joel was an interesting player as he showed a sense of flair in the game. Joel got an ankle injury at the 30th minute of the game and had to go off got Yasir to come on. But Joel had some good chances on goal.

LW – Halicharan Nazary 7: Nazary had some good skills in his bag while playing this match. He was great at handling the ball when he was under pressure. He was brilliant in building the play and keeping possession.

ST- Aridane 6.5: He always has won all the aerial duels he has been part of. He was so close to scoring with the header from a corner. He used to drop down in midfield at times to support play but no one used to cover his position.

CB – Harmanjot Khabra 6.5: Had an average game, didn’t impact the attacking aspect of the game for Bengaluru FC. He stayed at his position throughout the game. His passing was good even when in pressure.

CB – Juanan 6.8: Had an average game, played more as a left-back rather than CB but didn’t advance further. The Bengaluru FC tactics show that the back 3 was meant to maintain that structure and had certain stringent rules.

CM – Suresh Singh Wangjam 6: Had a poor game, didn’t make good passes, due to the formational structure he had a bit struggle in pressing and also the HFC players had quick passing and movement.

CM – Erik Paartalu 6.4: Erik was playing the central midfield role at times and sometimes he used to switch to a defensive role which even Dimas Delgado adapted after being subbed on. Erik played bad passes and took bad decision due to strong influence of HFC pressing.

LM – Ashique Kuruniyan 6.6: Usually a great dribbler. In the match he was not able to make a lasting strong statement. He used run into defense when the HFC squad was attacking and supported when BFC was attacking. Overall had a decent game.

RM – Udanta Singh 6.9: Udanta usually plays as an RW played as an RM and also did his defensive duties when needed. He was the only player in the BFC squad who successfully entered the final third a few couples of times. But in the second half and some difficulties.

RW – Cleiton Silva 7.4: He had a few shots that were off target but he did show a high work-rate. Silva is a good player when he has space to exploit. Especially during counter-attacks.

LW – Sunil Chhetri 6.5: Sunil had only one shot on target which was his only shot which was saved by Subrata Paul. Sunil was the pivot in the game he did the hard work in the attacking phase by making space for Silva in the middle with Kristian Opseth.

ST – Kristian Opseth 5.8: Had very few touches, didn’t make much of an impact on the game. He was not involved in the build-up of the attack at all. He stayed at the edge of the defense line of HFC to exploit a through ball or long pass.

Bengaluru FC had a hard time maintaining possession throughout the game as they lost many passes and were getting dispossessed by the opponents. Bengaluru FC was having a hard time making the final yard pass into the final third to take a shot or create a chance. BFC was containing the players, they didn’t try to pressure the game much.

Hyderabad FC was very fluid in operating the attack but again was not that impactful in the final third. Aridane had a brilliant chance to score against BFC but their strong goalkeeper kept all the balls out of the net throughout the 90 mins. Asish Rai and Akash Mishra pushed forward into the midfield to assist the attack build-up created by HFC. Poojary and Nazary were very calculative of their decisions in the build-up.

Bengaluru FC played a 3-4-3 where the 3 defenders remained at back all the times and one midfielder linked the defense and midfield when the team was attacking the opposition half. There was Pressure put by  HFC which made them move their ball into the midfield and then they usually lost possession thereafter.

Hyderabad FC had a solid CB partnership of Chinglensana and Odei. Odei marked Opseth the whole time and also did Chinglensana, The forwards were usually making space on the wing as the HFC full-backs were attacking and supporting forward when they had the possession. Hyderabad FC had decent defense but BFC had a poor attacking strategy so that’s how it went all draw.