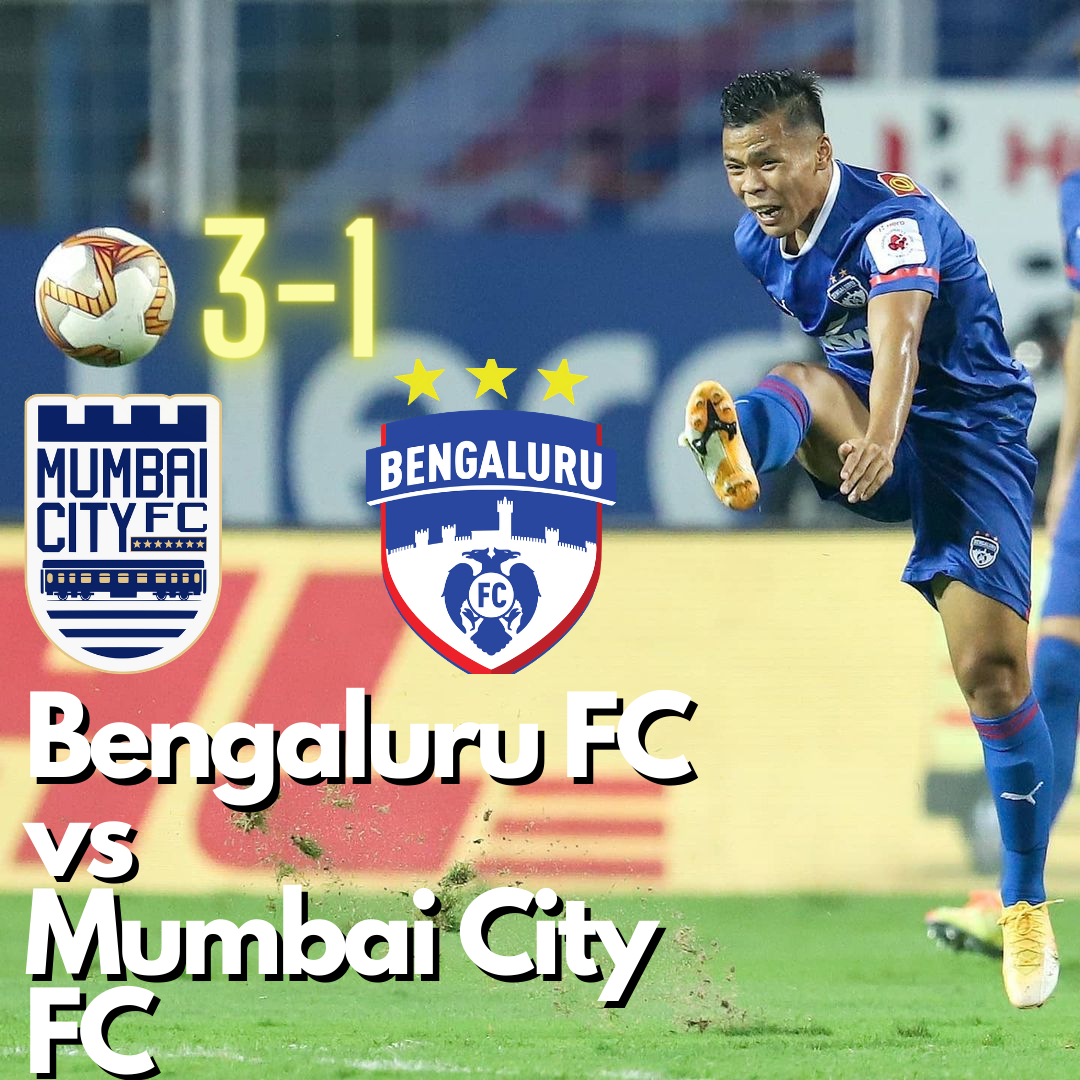 CLASH OF THE SHADES OF BLUE

GK – Gurpreet Singh Sandhu 6.4: Conceded three goals today against Mumbai City FC, also in the last few games of his he has not been in his best form. He has failed to keep clean in his last six games. He played a total of 90 minutes, he faced (6) shots of which (5) were on goal, and those five he only saved (2) shots. He did a massive blunder in the third goal that Bengaluru FC conceded. Had some four misplaced passes in the game which is not ideal as goalkeepers have space and time for the reaction to press.

LB – Rahul Bheke 6.8: Played 58 minutes as a left-back wasn’t much influential in the game for Bengaluru FC. His ideal role was playing at the left and staying behind. He was not told to attack or he didn’t attack the left flank. He is a player who usually plays as a center-back or right-back, and his playing style is very defensive rather than offensive.

CB – Pratik Chaudhari 6.5: Pratik Chaudhari played as a center-back in the match, he played until half time. Pratik had a decent game. He made (2) successful tackles and (2) Clearances and also had (2) blocked shots. His blocked shots were very crucial for BFC and also his contribution to defending and marking players efficiently was good.

CB – Juanan 6.4: Juanan played an entire 90 plus minutes but wasn’t on his top form and game today. He was a bit loose while defending a few important attacks from Mumbai City FC which led to goals for Mumbai City FC. His total defensive contribution was (3) Clearances and his offensive contribution was across. Overall he had the second-highest passes and touches in the Bengaluru FC squad. This suggests how Bengaluru FC played more passes in their own half.

RB – Harmanjot Khabra 6.7: Harmanjot Khabra the most reliable player in the Bengaluru FC squad with also good experience played a total 90 minutes of the match. He also played with a defensive approach in the game and didn’t push forward. He originally being a midfielder is more defensive rather than having attacked and also he was slow in tackles which led to a few fouls against him.

CM – Suresh Wangjam 6.9: Suresh Wangjam played as a central midfielder. He played proper 90 minutes. Suresh Wangjam had (8) tackles attempted of which only (1) was successful. His passing the first 10-15 minutes was very lousy. For the next 20 minutes he was constantly pressing opposition players to recover the ball. After that his game dropped until half-time. He had a total of 39 passes of which 30 were successful. A 77% passing success rate.

CM – Dimas Delgado 8.0: A massive rating for Dimas today, even though today his performance was not his personal best. Dimas was dominant in the midfield for Bengaluru FC. He made the highest passes in the team with (69) passes, of which (50) passes were successful. He was very crucial in the attacking part of Bengaluru FC and also in maintaining the possession for Bengaluru FC.

AM – Cleiton Silva 8.4: The most creative and chance creating player in the BFC Squad. Created (4) Chances the highest in the squad. Despite playing in a position that is not favourable for him. His originally plays as striker or a winger. His defensive and offensive contributions were many and good but equally he also lost possession and made misplaced passes multiple times.

RW – Deshorn Brown 6.1: Deshorn Brown unfortunately played only until half-time. Deshorn Brown played as a right winger in todays game. He was really less involved in the game with only (10) passes and (13) touches. He missed an open opportunity to score a goal in the first 10 minutes where the shot went extremely wide.

ST – Kristian Opseth 6.2: Kristian Opseth was the no.9 for the BFC. He didn’t influence the attack for BFC today. He is on a goal drought since the season started. He also missed a free-kick by fractions of a metre or so. His freekicks are lethally fast and strong. He had (3) shots of which (2) were off target and (1) was blocked by the keeper.

LW – Sunil Chhetri 7.0: The 36 year old had a few chances created where the goal was not far away, unfortunately there was no one to finish the chance created. Sunil Chhetri had taken(3) shots of which (2) were on goal and (1) was blocked. He created (3) chances in the game. Scored the only goal for Bengaluru FC which was a penalty that they won. Also got booked a yellow card.

GK – Amrinder Singh 8.5: Had an amazing game, faced a total (8) shots, of which (3) shots were on goal- of these three shots (2) he saved and (1) he conceded. That one goal was a penalty which was harsh on the keeper because the tackle by Mourtada Fall was perfect and the decision of penalty was wrong. Amrinder made amazing saves including saving a crucial freekick by Cleiton Silva.

LB –  Mandar Rao Desai 8.0: Mandar had a good game where he assisted one goal for Bipin Singh. He was great in attacking and also in defending. He played for 75 minutes of the match where he created (3) chances on goal and (3) Crosses of which one was an assist.

CB – Mourtada Fall 8.1: Mourtada Fall scored one goal, which was header from a corner. He was defensively very well positioned and was very important player for Mumbai City FC. He made (3) Tackles of which (2) were successful and one was foul which was given wrong by the refree which ultimately led to a goal for BFC. Otherwise technically Mourtada Fall had no Unsuccessful tackle as such. He made a staggering (10) Clearances in the entire game blocked a shot once.

CB – Hernan Santana 7.8: Hernan Santana played the entire 90 minutes. He assisted for the first goal that Fall scored with his head. He was defensively also strong where he would shift as a LB or LCB when Mandar would be high up the wings. Hernan had the highest passing accuracy in the entire game of 93% where he played 78 passes of which only 8 were misplaced.

RB – Amey Ranawade 7.0: Amey was the right back for Mumbai City FC. He was defensively not that upbeat or up to the mark and also he wasn’t much involved in attacking in the first half. But in the second half made a total (6) clearances as BFC started attacking left right and centre immediately as the match started.

CM – Ahmed Jahouh 7.8: Jahouh was sent off at the 86th minute of the game and Mumbai City FC was down to 10 men. He had a total (10) fouls to his name. And also this is his second red card of the season.

CM – Rowlin Borges 8.0: Rowlin Borges played centrally as a centre defensive midfielder. A classic player who has a great ball control, passing and pressing ability. An important player in the team. Rowlin had a passing accuracy of  82%, where he had a total 65 passes and 12 passes were unsuccessful. He made (3) amazing interceptions.

AM – Hugo Boumous 7.4 : Hugo Boumous played only until the 75th minutes of the game. Hugo tried to adnavnce multiple time by dribbling the ball through the defense but failed a few times and also wasn’t that influential in the attack in the final third. Had a passing accuracy of 80%.

LW – Bipin Singh 8.5: The Manipuri had an amazing match scoring one beautiful goal for MCFC with an assist from Mandar Rao. He is a fast and quick agile player with the ability to pass and dribble past most players.

RW – Raynier Fernandes 8.0 : Raynier was present in the game but wasn’t much influential throughout the game, He played only 66 minutes in the match. He didn’t contribute much offensively other than one cross which almost made it inside the net, he had more defensive contributions.

ST – Adam Le Fondre 7.1: Adam was a very strategical positioned by Sergio Lobera, where Adam would drop deep to link play between midfield and attack. He would be the second striker behind Bipin Singh at times and sometimes the MCFC attacking lineup would have four forwards against the entire BFC defense. Adam had a beautiful open goal opportunity which was blocked by Pratik Chaudhari.

Bengaluru FC was lacking the mettle to overcome the deficit created within minutes of the first whistle. Great game for our youngsters – Suresh Wangjam, Ajith Kumar, Amey Ranawade, and Pratap Singh.