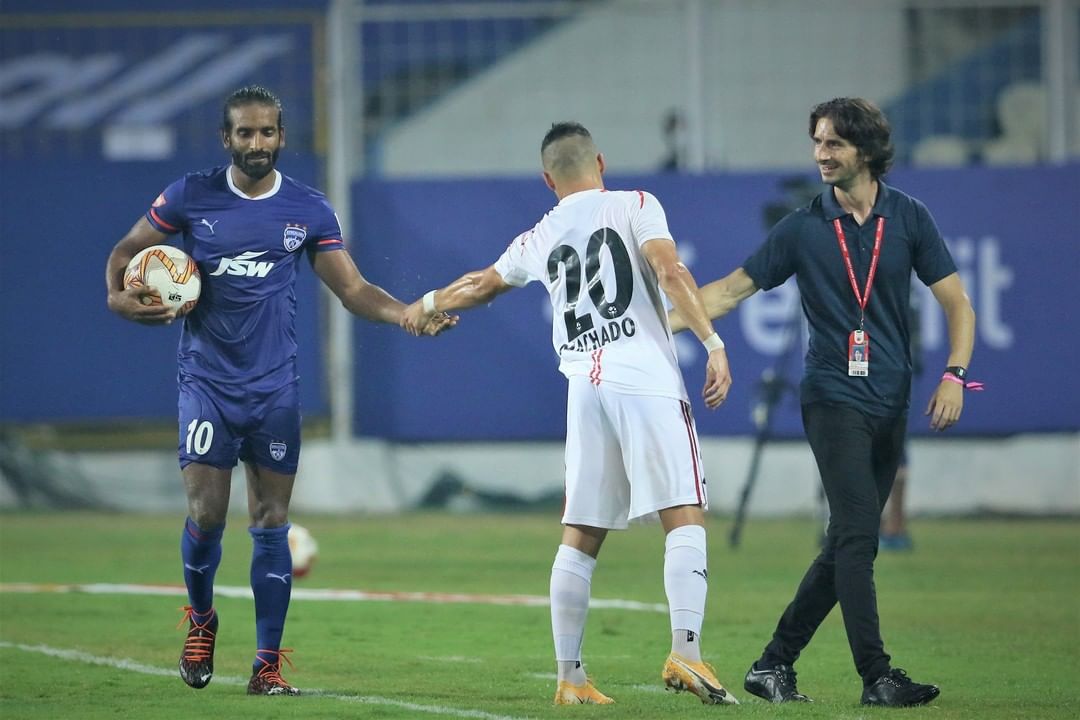 GK – Gurmeet 7.6: Gurmeet faced 17 shots of which 2 turned out to be goals. Of the 17 shots, 7 were shots on goal, and 5 were saves. Overall he had a good game considering the playing style incorporated by Bengaluru FC. He had an average distribution, mostly played short passes, he did some errors too. His attempt to stop the second goal was not so strong and firm which ultimately led to a goal. He did make some brilliant saves and did some errors too. Overall an average match for him but a good performance considering the opposition attack and maintaining the scoreline.

LB – Gurjinder Kumar 6.8: Gurjinder Kumar played 72 minutes in the match, throughout the match he stayed behind and maintained the back four. He did play some misplaced forward passes. But overall had an average game, Since he didn’t attack much he had no crosses on his stat list, also he did not have a strong attacking threat as Cleiton Silva used to make runs inside rather than outside, and also Harmanjhot Khabra wasn’t much of an attacking threat for Gurjinder on the left flank.

CB – Benjamin Lambot 7.5: Benjamin was the center-back who played well and made a difference by defending well throughout the game. Benjamin did errors in defending some set-pieces one of them which ultimately led to a goal. He had the 2nd highest touches in the game from the North-east United Squad. But a strong figure at the back orchestrating and managing the defense lines of his team. Had some difficult time when through balls were played and short low crosses were played. Blocks and Clearances were crucial from Benjamin, where 3 clearances and 3 blocks were done.

CB – Dylan Fox 7.4: Dylan and Benjamin were having a good center-back partnership as they defended together. They had a tough time handling the attack by Bengaluru FC especially from the left flank where Sunil Chhetri and Ashique Played. Dylan Fox completed 6 clearances throughout the game, 1 Interception, and surprisingly zero tackles made. Overall a tough game for him but coped well.

RB – Ashutosh Mehta 7.8: Had an amazing game where he defended his right flank really well. Especially shut down many attacks from Sunil Chhetri and Ashique Kuruniyan. His role primarily was to stay behind and defend and when the opposition was in possession and overloaded their attack in their half he used to turn into a center-back. Originally a Centre Back, Ashutosh Mehta uses his height as a prowess to defend corners. Overall a great game for him.

CM – Rochharzela 7.3: He had an average game where he took a shot on goal which deflected and went inside the net. This goal was awarded to Luis Machado for the deflection. Most of his game time went in recovering the ball as Bengaluru FC had a major chunk of the possession. He has some good fitness levels as he pressed opponents efficiently throughout the game, some of them even turned into chances. He had 4 unsuccessful tackles in the game.

CM – Lalrempuia 6.7: He had an average game too, played around a total of 14 passes in the game of which 9 were successful, He had the ball for a very short time during the game. Lalrempuia and Rochharzela did much of the pressing work in the North-east United FC’s system. His role was that of linking up attacks as a pivot.

DM – Khassa Camara 7.5: Khassa Camara had a difficult yet good match because even though he didn’t have much possession on the ball but he managed to keep the ball and rarely lost the ball and also had the good passing ability and making space for other forwards and midfielders. He had the highest amount of touches in the NEUFC Squad with 45 touches even when they had less possession.

LM – Luis Machado 8.9: Luis is the creative winger who creates chances and makes good dribbles. Luis scored 2 goals, of which one was a deflection and the other was an open play goal where he had a 1v1 situation with Gurpreet Singh Sandhu where he scored the goal. His dribbling, making space, passing, and ball control in tight spaces is brilliant. He the creative player of the team. He had a great game yesterday apparently. He could possibly be one of the best creative wingers in the ISL.

ST – Kwesi Appiah 7.4: Had a decent game, played 60 minutes where he had one shot on goal, and also created one chance. He maintained a typical position wherein he was looming at the edge of the defense line to receive any through balls or long ball which in fact he did receive from Suhair VP and Rochharzela. Kwesi was in the offside position twice which somewhat explains his positioning and his intent.

RS – Suhair VP 7.5: Suhair is a fast & quick player, usually he used to play as a striker or winger but in this particular game he played a bit deeper position of the second striker. He was the linkup between midfield and forwards where he would eventually drop to bring opposition defenders in the wrong position to exploit any free through ball. Suhair had a below-average game where his passing success rate was 47% and also didn’t create any major notable chances or shots. He only had one shot on goal and one chance created. A great signing from Mohun Bagan but there wasn’t much to observe as he had really less ball time.

GK – Gurpreet Singh Sandhu 7.5: Gurpreet had an unlucky game wherein he conceded the first goal which was a result of 2 deflections, the momentum of the reflex by Gurpreet was so misdirected. Gurpreet faced 7 shots of which 5 were on goal and 2 of them were goals conceded by him. He had 2 clearances, one punch, and two catches. Overall an average game with good crucial saves too.

RB – Rahul Bheke 7.5: Rahul was a good presence in the defense line, he is strong and tall and has good defending skills and positioning skills. He defending well on the right side and also in the center-back position at times. He usually used to give long passes to ST or RW when they had space upfront. Had a good game. Didn’t do many errors.

CB – Juanan 7.7: Had a great game and also scored a goal. Juanan had a good game but his one unsuccessful clearance led to a NEUFC goal by Luis Machado. A goal and an error in the same game. Evens and balances it out. Juanan had 83 % pass accuracy of the total 69 passes he played and 83 touches he had. He did 4 tackles of which only 1 was successful, 2 clearances and 2 interceptions made.

CM – Dimas Delgado 8.8: He had a very busy and splendid game. He was a center back, right back, and left-back when there was a positional shift in the BFC squad when they attacked. Dimas was the supporting player in the defense. He acted as a third defender and also contributed to his midfield duties. Due to heavy possession by BFC throughout the game, Dimas was always on the ball giving long passes and short passes. He has the highest touches and passes in the entire game. With 95 touches and 70 passes completed with a pass accuracy of 80%.

CM – Erik Paartalu 7.5: A proper box to box midfielder with great passing and defending ability. Erik was standing support and link between midfield and defense but mostly stayed in the midfield. He had a passing accuracy of 76%. 2 unsuccessful tackles and 1 interception were recorded by him. His height was of great advantage for the team while attacking and defending set-pieces. He dominated in aerial duels.

CM – Suresh Singh Wangjam 7.9: A solid performance by the Manipuri, he played 63 minutes in the game but almost covered the whole pitch in pressing and ball recovery stages. Suresh Wangjam was the engine in the squad, he was everywhere, whenever the ball was lost he would be the first player to try and recover the lost possession. Again a box-to-box trait played very centrally and did advance in attack at times.

RM – Harmanjot Khabra 7.4: Khabra was a right midfielder and played majorly on the flanks and didn’t play centrally much. Khabra was maintaining the flow and rhythm of the possession play played by Bengaluru FC. Had 50 touches, one clearance, and one unsuccessful tackle in the game. He missed an absolute sitter goal, he played the shot with his weaker left foot, BFC missed out on an early possible second goal

LM – Ashique Kuruniyan 9.0: Man of the match for me, created so many chances and made so many overlapping runs and dribbled past so many defenders, and also created so many set pieces opportunities. Which were very crucial for Bengaluru FC in their attack. Ashique was an important player with a role in the game by linking up with Sunil Chhetri and exploiting the left flank. He had 4 shots of which 2 were shots on goal. He was very close to score the goal which was finger-tipped away by Gurmeet. Amazing buildup and dribbling by covering 60-70 yards on the field.

ST – Deshorn Brown 6.9: He had an important role to play in the game as he was dragging off the opposition defender along with him and this created space for Cleiton Silva to take positions inside or near the 18-yard box and also created vulnerabilities. He had the lowest touches in the game (8). He was subbed off at the half time.

NorthEast United FC always had that striker or winger ready to exploit a long ball or through ball given by one of its midfielders. Suhair VP and Kwesi Appiah were usually the targets. There was build-up play too in the North-East United FC attack, but it was more lethal when they attacked Bengaluru FC  in a transition phase from attack to defense. They did continuous pressing and it was a very active and quick flowing game.  NEUFC didn’t use any flanks to attack majorly until Ninthoi came in for Rochharzela. The goal by Luis Machado shows exactly the area through which they attacked that was central.

Bengaluru FC was building the game up one by one and tried to maintain the possession throughout the game. Bengaluru FC was advanced mostly from the left side with Sunil Chhetri and Ashique building up play, and also where Ashique would dribble the majority of the area and build the attack for Bengaluru FC.

HOW DID THEY DEFEND?

North-East United struggled to defend at first and Bengaluru FC was very fluid and quick in the attack, but their defense was lined up as four defenders with both the full-backs staying behind. They didn’t attack much. They tried to keep a low block which was effective a few times. Their Defenders were very good at attacking set-pieces.

Bengaluru FC defended with a 3 man defense where the 3rd defender was either Dimas Delgado, Ashique Kuruniyan, or Harmanjot Khabra. Juanan and Rahul Bheke being the constant and fixed defenders. Bengaluru FC’s defense was open but when North-East United FC was attacking they grouped as a 1-5-4-1, whereas their initial position was 1-2-1-4-3.  The goal scored by NEUFC was the prime example that Bengaluru FC played an open defense and once challenged could be vulnerable for them.

It was a great game for Ashique, Suresh Singh Wangjam, Ninthoi, Rochharzela, and Ashutosh Mehta. This match performance could get them the National Team Camp Call-up.