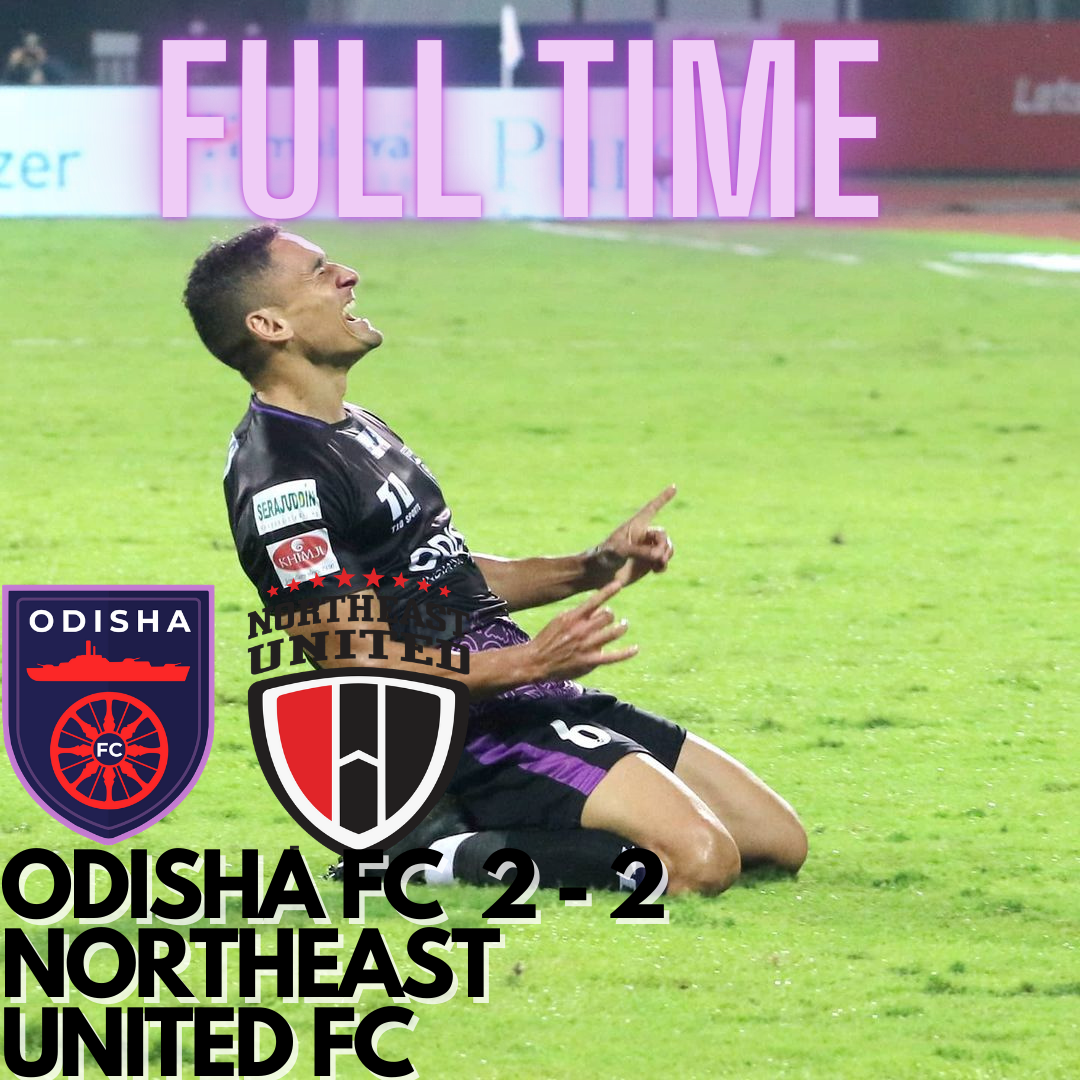 Arshdeep Singh 7.4: Conceded two goals, did make some good saves in the match. Odisha FC’s top choice keeper. A tota of (15) shots were faced by Arshdeep Singh in the goal of those fifteen shots (6) were on shots on target. A total of (4) saves were made out of the six shots that were faced and (2) goals were conceded. Arshdeep was almost close to saving the penalty scored by Kwesi Appiah, an overall decent game for the keeper.

Shubham Sarangi 7.5: A solid defensive game from Shubham, provided that he also contributed to attack also, he pushed himself up the flank many times to support the team. Created (1) chance on goal and also had (1) shot on goal. Had (5) crosses to his stats and also he had the most amount of touches (62) in the entire Odisha FC squad.

Jacob Tratt 6.8: Had a mediocre game, defensively was very average. He could have cleared off the first goal scored by Benjamin Lambot. Benjamin was not well marked by Jacob. Also he wasn’t very reactive on attacking corners also, he didn’t give a strong challenge. But his positioning and composure was good in the game. Originally a right-back.

Steven Taylor 7.5: Steven Taylor had an average game. He was a constant in the back four defence line. He completed a total of (18) passes and achieved a total of (81%) passing accuracy. He also cleared the ball (6) times in his own defensive half. He was attacking well during the set-pieces.

Hendry Antonay 7.0: Hendry played the entire 90 minutes, he was a bit weak defensively especially in 1v1 situation of the left side. He also attacked on the left side of the pitch. A total of (1) cross, (2) Interceptions and (2) clearances were recorded by him.

Vinit Rai 7.9: Vinit had a good game, very active on the field. Had the most passes completed in the entire Odisha FC squad with (27) Passes Completed with a pass accuracy of (64%). He played less long balls this game unlike like the last game. He was crucial player in the midfield.

Cole Alexander 7.9: Alexander scored the second goal for Odisha FC, a very well controlled pass by Jerry which Cole Alexander netted from the left side of the penalty box. A very beautiful goal which went into the right bottom corner of the goal and was unable for Gurmeet to save. He also gave defensive contributions with (2) Interceptions (2) Clearances and (1)Block.

Gaurav Bora 7.5: Gaurav Bora had a good game. A centre-back originally played as a defensive midfielder for the last few matches for Odisha FC. His passing and attacking aspect are quite normal or average, but he tries to tackle a lot, especially sliding tackle. He is very good player in terms of defensive abilities but when it comes to being a midfielder he might need more time in that position.

Diego Mauricio 8.8: A very splendid performance by the Brazilian for Odisha FC. He scored the first goal for Odisha Fc from a very tight position. Gave a try to the same shot a few times later in the game too. But Diego was on top of the game today for Odisha FC.

Manuel Onwu 7.5: Manuel Onwu also had a busy game. He wasn’t very clinical in his shots taken today, but had many other chances which he failed to finish off. He made (3) crosses in to the box and also had (3) shots of which none of them were on target.

Jerry M 8.4: Jerry was a good player on the pitch. He played the Right Wing position. He gave (1) assist and (3) chances created in the match. He was the dribbler in the team. Also he was the corner taker in the team. A very important creative winger.

Gurmeet Singh 6.7: Gurmeet Singh played a total of 90 minutes. He had a normal game today. He faced a total of (11) shots, of which he saved (2) and (2) the goal he conceded. Both the goals that he conceded were from a shot from a long distance and were in the potentiality of Gurmeet to save it, but it was not a lucky day for him.

Ashutosh Mehta 8.2: A good game for him, He gave (1) assist to Benjamin Lambot. Also, he has put in (6) crosses inside the box which is the highest by any player in the match. Defensively Strong with good pace and strong aerial ability. Ashutosh Mehta had a very good game.

Benjamin Lambot 8.8: Benjamin Lambot scored the first goal for North-East United FC. He scored the goal by heading it in through a cross by Ashutosh Mehta. Completed (39) passes with a passing accuracy of (91%). Benjamin Lambot defensively made (4) clearances, (2) interceptions, and (2) Blocked shots. Very impressive stats and defending by him.

Dylan Fox 8.2: Dylan Fox played as a center back and was a very important player for the team today. He completed the most passes today in the entire match with (40) passes completed with a passing accuracy of (93%). Dylan Fox also made a crucial goal-line clearance.

Gurjinder Kumar 7.5: Gurjinder Singh played as a left-back in the entire match. Gurjinder Kumar was defensively very well settled and also he would attack or push forward to attack on the left flank.

Lalengawia 8.7: Really an amazing game for him. Made a total of (56) touches in the game. He was placed very centrally, he was the pivotal link in the midfield. He was not been dispossessed so easily. He retained the ball well and had amazing ball control. His passing was also very good.

Lalrempuia 8.3: Played 71 minutes in the game. He had an average game as a midfielder. He has more to him than what he played today, very strong ball control, and a quick ability to attack. He made some good decisions in the game that affected the attacking factor of NorthEast United FC.

Britto PM 6.5: Britto PM had a very basic average game. He whenever would get the ball would pass the ball backwards, this is usually fine but he didn’t challenge and dribble the player past or go forward even when there was a clear chance. His dribbling and ball control seemed good.

Kwesi Appiah 7.8: Kwesi scored the second goal for NorthEast United FC. He had four shots of which two were on goal and two were completely missed by him. He defended very well against the set-pieces. His heading ability is very good.

Luis Machado 8.0: A very good player who had an unlucky match. He is a good dribbler and also a very agile quick player with loads of creative football in him. Today he was trapped mostly in the defense. whenever he had possession, opposition defenders would press him and dispossessing him.