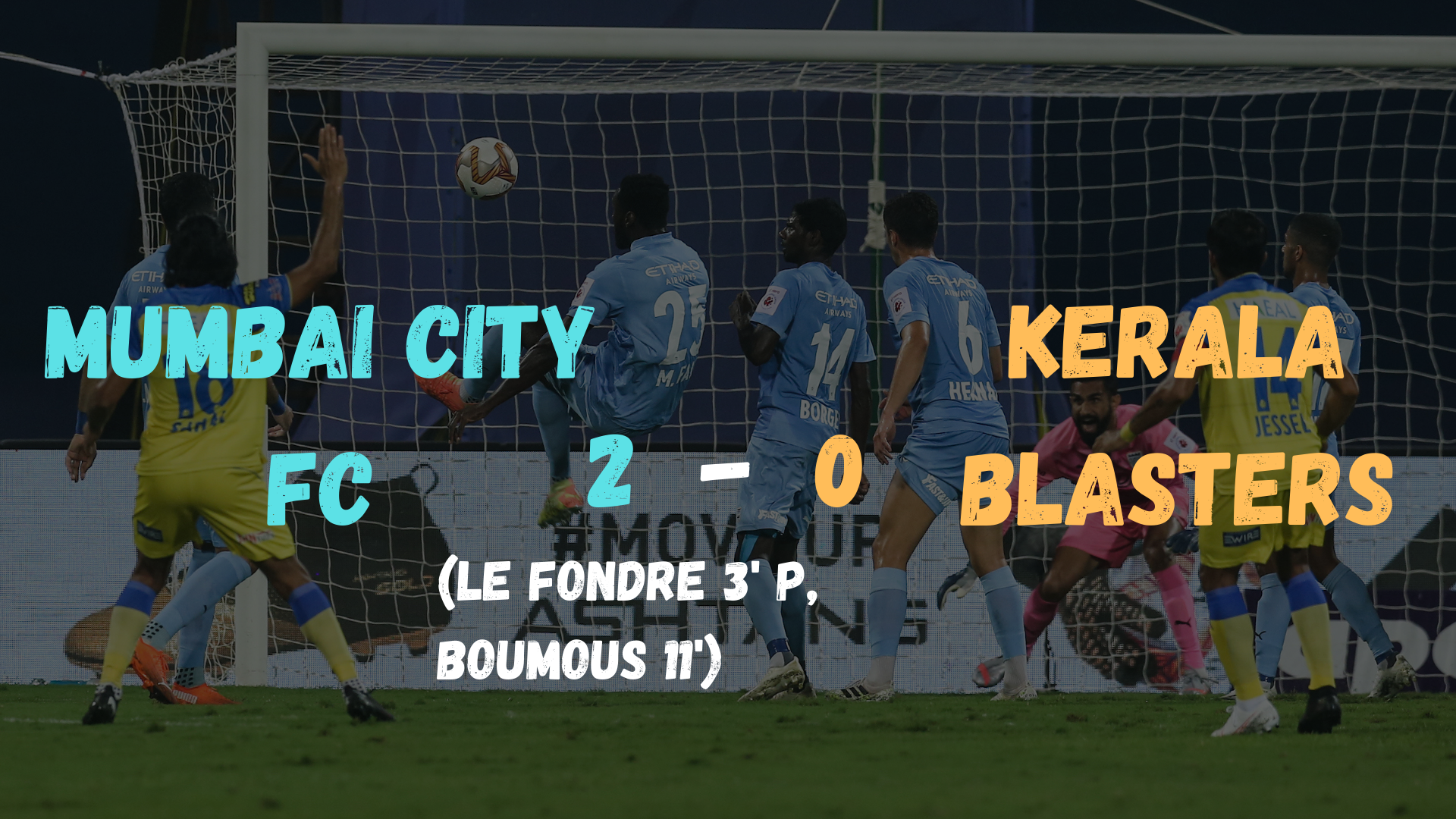 Mumbai get an easy win over struggling Kerala Blasters FC, as they continue with their winning streak in Hero ISL Season 7. Goals from Le Fondre and Hugo Boumous help Mumbai get the win.

Mumbai started the game as if they looked to finish the game in the first half itself. They had taken a 2-0 lead in the initial ten minutes, which could neither be equalized by Kerala nor extended by Mumbai. Amrinder kept his spot between the sticks. Mandar returned to the starting eleven, after missing a lot of games. Boumous was back in the squad too, after recovering from an injury.

Amrinder – 8.0: Probably the man of the match performance from him tonight. He managed to keep his fifth clean sheet of the season.

Fall – 7.5: The Senegal player proved his importance once again as we saw important tackles and clearances from this big man.

Hernan – 7.0: Managed to cope up with the high intensity pressure Kerala were trying to build around him.

Mandar – 7.0: Not much crosses were seen from him, but he had a decent game tonight.

Amey – 7.5: The young 24 yr old Indian, retained his spot on the right back. He provided good crosses and took part in the attack.

Jahouh – 8.0: What a game this man had, once again. From his touches, to his long balls. No team can literally stop this guy from providing the team with good passes.

Borges – 7.5: He played a pivotal part in managing the team to keep the clean sheet, and breaking down opposition’s plays.

Boumous – 8.0: He got a goal to his name, as the longest through ball by Jahouh from their own penalty box, fed the run of Hugo, which found the back of the net in the 11′.

Bipin – 7.5: He had been improving a lot under Lobera. Pace has been his main asset along with excellent passing and decision making. He needs to shoot more from his strong left foot, which cane make him score more often.

Raynier – 7.0: Played a good match, but needs to get more game time to suit perfectly along side Le Fondre, Boumous and Bipin, who are regular starters.

Le Fondre – 7.0: Even though he got his sixth goal of the season from the spot kick. He didn’t manage to touch the ball more often as one would have expected from him.

Even after conceding two goals in the opening eleven minutes of the game, they didn’t lose hope and kept on going until the last second. Albino made his third penalty save of the season. Sahal, Murray and Vincente Gomez were unsuccessful in scoring a goal against the hosts.

Albino – 7.5: After conceding an early penalty and an open play goal. He managed to prevent the attack of Mumbai from getting more onto the score sheet.

Costa – 7.0: He was included back in the starting lineup after loosing his place in the last match. He conceded the early penalty due to a foul on Boumous, which eventually was scored by Le Fondre.

Sandeep – 7.5: He played a good match tonight as he made his second appearance this season. He put on some well timed tackles which were crucial to the team.

Nishu – 7.5: He provided some real good crosses, but certainly needs to improve personally.

Jessel – 7.0: The captain also made his second start of the season along side Sandeep, and managed to keep the score 2-0, even though Mumbai’s attack looked lethal.

Jeakson – 8.0: He was the only man visible making tackles and efforts in the middle of the park in the first half. He had a decent game.

Vincente Gomez – 7.5: He tried to help his team in all ways, but was kept quite by the defense of Mumbai.

Peryera – 7.5: He looked lethal whenever he had the ball. Due to lack of support mainly, he wasn’t able to create more chances.

Sahal – 7.5: He was the best player on the pitch for Kerala. He had so many shots on target and so many chances to even equalize and take the lead for his team. Unfortunately, he was unsuccessful in doing any of them.

Puitea – 7.0: He too missed a couple of chances, among which one could have been an easy goal, only had the timing been correct.

Murray – 6.5: More can be expected from the man who leads the attack for Kibu, but his performance was not upto the mark tonight.

Mumbai City FC looked the promising side from the start of the game. They attacked sharply with high pressing. Jahouh as usual dropped deep along with Fall and Hernan, making it three at the back. The full backs, Amey and Mandar pushed forward in a chance to creating some chances for the team. Every play of Mumbai almost always starts from Ahmed Jahouh, who along with great vision, has great ability to feed the balls to the attack upfront. Borges usually makes it four in the final second, along with Boumous, Amey and Mandar, making it a final 3-4-3 during their attack.

Kerala seem to maintain their 4-3-3 lineup throughout the game. They looked for loopholes in Mumbai’s defense by pressing them very high, leaving them to make vulnerable mistakes. They could not capitalize well on Mumbai’s mistake that well. And even if they did, Amrinder made sure none of the shots gets past him. The players need to give more as a team, as their individual performances are not bringing enough result for Kibu.

GOAL: Mumbai City FC 1-0 Kerala Blasters: It was start of the game, when high pressing by Mumbai led Vincente Gomez to make an indecisive back pass to Costa. The pass being very unexpected, couldn’t be collected by the center-back, which eventually led to the foul inside the box, which was obviously given a penalty. Le Fondre fired the penalty in the middle of the posts, to give Sergio Lobera a comforting start in the game.

GOAL: Mumbai City FC 2-0 Kerala Blasters FC: The defense of Kerala and Kibu Vincuna were taken by surprise in the 11′, when a long ball from the defensive half of Mumbai by Jahouh, was fed to the erratic run made by Hugo Boumous. The through ball cleared through the ten men of Kerala, which was then easily finished by Boumous to give Mumbai an early hope of a riot.

Mumbai take the top spot in the table, with just two points above defending champions ATK Mohun Bagan. They have scored the most goals in the league so far.

Kerala have won just once this season. They have been struggling hard at the third from bottom position, after eight games.