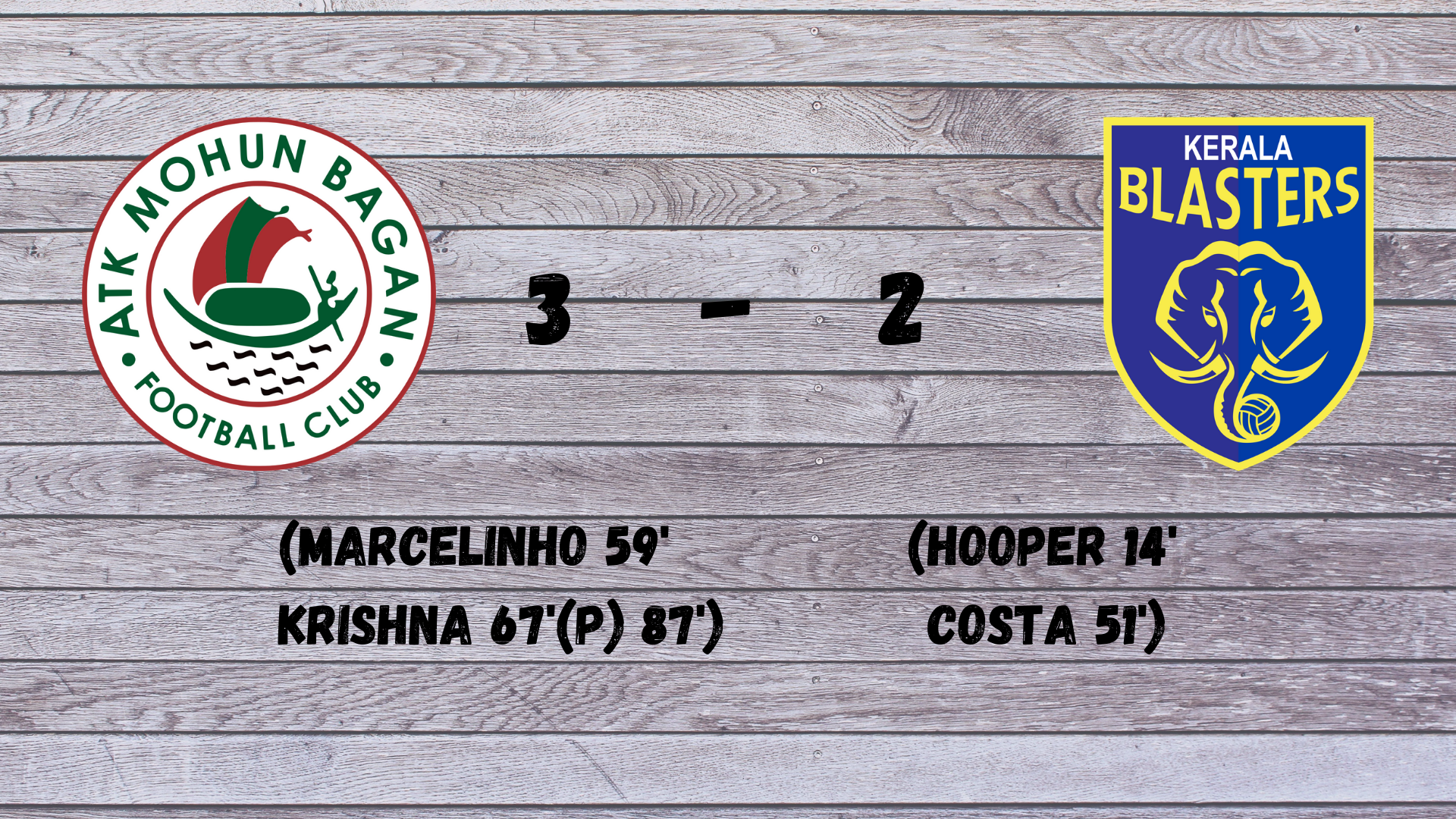 A five goal thriller ended the match in ATK Mohun Bagan’s favour as they do a double over Kerala Blasters. Krishna scored a brace as Marcelinho, Hooper and Costa score each for their teams.

A usual day of football philosophy by Habas. ATK Mohun Bagan started the game in a balanced manner. They tried to breach Kerala Blaster’s defense twice in the first half but were unsuccessful in that. They were looking like a team lacking qualities, specially in the final third even after having Marcelinho on his debut for this team. Though he scored the perfect goal on his debut, giving the Mariners a hope of ray to finish the game on a high note. Arindam was not so good at the back, as he conceded two goals. The first one was a stunning volley from Gary Hooper, and a second from the center back Costa.

The team looked confident and so did Habas made important substitutions at the half time to make his team attack more. Pronay was brought in for SK Sahil and Manvir in place of Rathi. The backline did their job by managing the pressure during the dying minutes of the game. McHugh once again was phenomenal on the field. The Mariners were allowing Kerala’s attack get on easily with their jobs, as they were keeping lots of empty spaces for Kerala to capitalize. Absence of injured David Williams did not incur much losses to the team as Prabir, Manvir, Marcelinho and Roy Krishna did their jobs right to put ATK Mohun Bagan just three points behind league leaders, Mumbai City FC.

Kibu Vincuna probably did not the idea that he could lose this match after getting two past ATK Mohun Bagan. His side have been in good form, being unbeaten in last five matches. There was a fantastic first half from Kerala and a good initial second half too. But the hopes of taking the three points home were broken down from Marcelinho and Krishna, as they led ATK Mohun Bagan back to winning ways. Kerala played much of their football from the right back, with right full back Sandeep and the winger Rahul KP, getting more oftenly involved. Sandeep delivered quality balls into ATK Mohun Bagan’s box for Hooper and Murray to capitalize but many of them were not done upto the mark.

Albino Gomez behaved more as a sweeper keeper, coming out his box on twice occasions to prevent Krishna getting goals past him. Costa got a goal to his name, as both full backs, Sandeep and Jessel did amazing work to keep Habas’s team’s defense on the feet. Vincente has majority of Kerala’s ball, as KP Rahul was clinical in his game. Not much was seen from the wonderkid, Sahal. Hooper scored an amazing volley from a pass fed by Sahal. Murray also tried to copy Hooper’s goal few minutes later in the game but was unsuccessful in doing so.

GOAL: ATK Mohun Bagan 0-1 Kerala Blasters: Kerala were playing just casual football when a heavy chest touch from Hooper, allowed to take him the volley. Arindam was beaten easily. There were no ATK Mohun Bagan players in and around Hooper which allowed him to take the volley quite easily.

GOAL: ATK Mohun Bagan 0-2 Kerala Blasters: ATK Mohun Bagan conceded a corner in the 51′. Sahal took the corner, delivering it to KP Rahul, who directed it towards Costa. Costa doubled the lead of Kerala which looked liked a difficult moment for the Mariners.

GOAL: ATK Mohun Bagan 1-2 Kerala Blasters: Marcelinho scored a beauty by chipping Albino just seven minutes later, after Costa doubled the lead for the Yellow army. Manvir fed a through ball for the Brazilian, who finished it with all his experience and calmness.

GOAL: ATK Mohun Bagan 2-2- Kerala Blasters: Krishna was once again on the score sheet, as his goal from the spot proved to be an important goal for letting ATK Mohun Bagan take the win home.

GOAL: ATK Mohun Bagan 3-2 Kerala Blasters: Once again it was Roy Krishna, not from the spot. But from a placement from his weaker left foot which gave ATK Mohun Bagan the win. It was Krishna’s sixth winning goal this season. What would have been this team without the Fijian?

ATK Mohun Bagan bridge the point gap between them and Mumbai City FC to three points, having played the same number of matches. They have been on second position since more than a month now, and will look to catch early for the Champions League spot. They next face bottom placed Odisha FC on 6th of Feb.

Meanwhile, Kerala had a chance to go to 19 points, just two behind fourth placed Goa. They had their hopes shattered to ashes as defensive errors and team spirit cost them the points. They next face league leaders Mumbai City FC, hoping to get some points against such a difficult opponent.

3,218 thoughts on “Krishna scores the winner as Mariners bag three points against Kerala”