Lineup and Player Ratings: ATK Mohun Bagan get back to winning ways 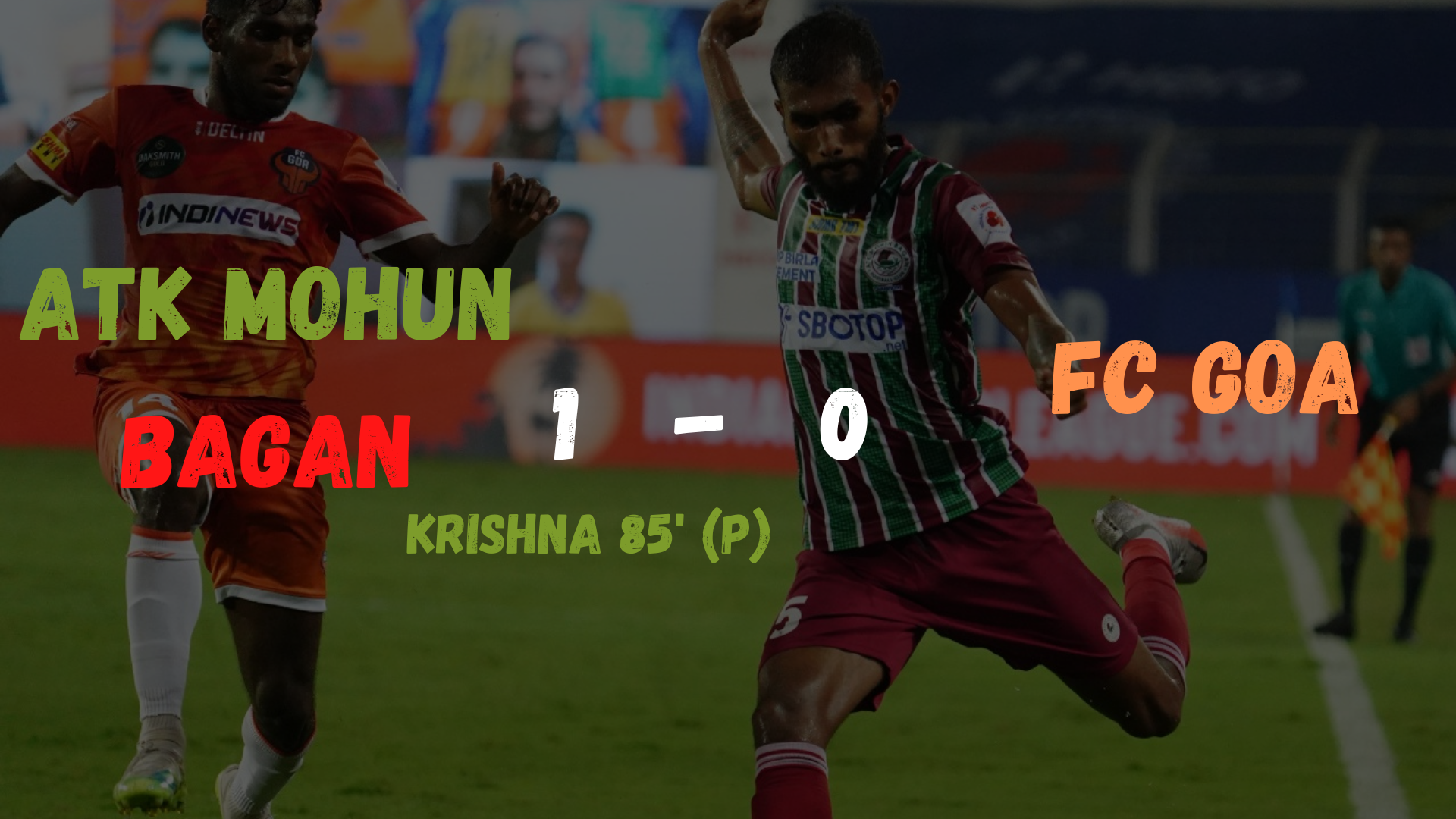 Let’s look at each team’s lineup and player ratings after a brief introduction to the match.

Antonio Habas chose a very surprising and disciplined side to face the possession based heat of football by FC Goa. He started with a 5-4-1 formation, getting many players back into the squad. He probably rested them for this important clash. Tiri, Jayesh, Pronay and Williams were included, who all missed previous game against Hyderabad FC.

Arindam – 7.5: He was tested on a number of occasions tonight and kept a clean sheet against the mighty Gaurs. He even came out of his line to collect some of the balls.

Tiri – 7.5: Played pretty well and showcased a very disciplined football, though he got a booking in early minutes of the game.

Jhingan – 7.5: Kept the opposition attack from scoring and made some really important tackles, particularly after taking the lead.

McHugh – 8.5: This man proved once again, what an asset he is to this ATK Mohun Bagan team. From breaking down plays, to tackles, interception, pressing high up the pitch. You could probably see this man everywhere tonight.

Subhasish – 7.0: Though not many crosses came from him in the attack, he executed the coach’s plan perfectly by keeping the opposition play confined on their right flank.

Pritam – 7.5: Made some really important and decisive runs and tackles to prevent the attack of Goa from getting past ATK Mohun Bagan’s defense.

Jayesh – 7.5: He has not made many starts this season, but he did what exactly he was brought in the starting eleven for. From chasing down opponents in their own half and making important sprints to keep up the pressure. He was ecstatic tonight.

Pronay – 8.0: He was successful in breaking down opponent’s play in their own half. He also made some few chances, specially for David Williams in the first half which could have been the opening goal. He also tried a shot when Goa’s keeper was out of his line.

Williams – 8.0: He partnered Krishna up front perfectly. He kept the pressure build when opposition had the ball. Williams could have had a goal to his name five minutes before the end of first half, when he hit a left footed volley which unfortunately hit the side post.

Manvir – 7.5: The young 25 yr old Indian striker pushed up alongside Krishna and Williams. He tried to create some scoring chances for Krishna and the company on the attack but couldn’t help much. Overall he performed well.

Krishna – 8.5: This man is as consistent with scoring goals as a mother is in scolding her child. You simply cannot stop this man. Though he found the back of the net from the spot-kick, he played an important role for Habas and his team to play the style of football they had planned.

Juan Ferrando started without the likes of Princeton Rebello, Brandon Fernandes and Ortiz which could be a factor that cost them this match. He should have started with at least one of them, keeping other two as fresh legs for last minutes of the game. Edu Bedia was back in the starting eleven and Romario and Donguel started on the flanks.

Nawaz – 6.5: He did not make many saves tonight. He is young and needs to improve a lot. Though, given his age and experience, he did well in taking decisions as ATK Mohun Bagan were pressing high up the pitch.

Saviour – 7.0: He was allowed to make some good passes and play for FC Goa and played with more freedom in the second half.

Ivan Gonzalez – 7.5: He managed to keep out Roy Krishna on a couple of occasions with his tackles and experience.

Donachie – 7.5: Partnered well with Ivan on the defensive line to keep ATK Mohun Bagan was scoring from open play.

Seriton – 7.5: The right-back of Goa was clinical defensively and attackingly both. He made tackles outside the box to prevent the ball being fed to ATK Mohun Bagan’s attack.

Lenny – 7.0: He was squeezed in the middle of the park along with Edu Bedia and was forced to play mispasses in his own half. Was not upto the mark he usually is.

Edu Bedia – 7.0: Bedia didn’t enjoy the freedom and flexibility in the game which he usually has. He was surrounded and pressed by ATK Mohun Bagan, which led him to make errors just outside his defensive box.

Noguera – 7.0: Though he managed to get a header as an open threat only in the second half, not much was seen in the first half of the game from the Spanish.

Romario – 7.0: He exchanged flanks with Donguel occasionally and managed to get hold of Goa’s attack more frequently after the first half.

Donguel – 6.5: It was difficult for him to thread passes with his team. He didn’t had a game he expected to be.

Igor Angulo – 6.0: He did not manage to get a single shot on target. It surely has created problems for FC Goa when this player is not upto the mark for his team. There is too much dependability on him by Ferrando.

Antonio Habas dominated his style of play from the first minute of the game. He did not have a direct attacking approach, but decided to execute a plan which included pressing high up the pitch. Krishna, Williams, Jayesh Rane and occasionally Manvir Singh tracked down their opponents from the moment FC Goa had the ball in their defensive court. This made FC Goa’s players to make errors into their own half, upon which ATK Mohun Bagan’s attack and players capitalized.

Carl McHugh also made his way up front, and even fall back behind when the ball fell into the feet of FC Goa’s possession. They made their way up, to press the opposition as a whole unit and not just a single player. The defense also climbed up to the half-line or so, to prevent the gaps which could have been exploited by the likes of Angulo, Romario and Noguera.

GOAL: The only goal of the game which separated the sides came five minutes before the end of the normal time from the spot kick. Krishna was fouled by the defense of FC Goa and was awarded a penalty. It was Roy Krishna who took the responsibility of striking it past Nawaz, into the right bottom corner.

In the dying minutes of the game, Saviour Gama tried a wonderful, powerful volley from outside the box, which was kept out by Arindam.

ATK Mohun Bagan go level on points with table leaders Mumbai City FC. The only stat separating the two title contenders is the goal difference. Mumbai sit on top with a difference if +6 and ATK MB beneath them with a difference of +4.

FC Goa sit sixth in Hero ISL 2020-21, with 8 points to their name, with winning, drawing and loosing two games with respect to each aspect.

71 thoughts on “Lineup and Player Ratings: ATK Mohun Bagan get back to winning ways”