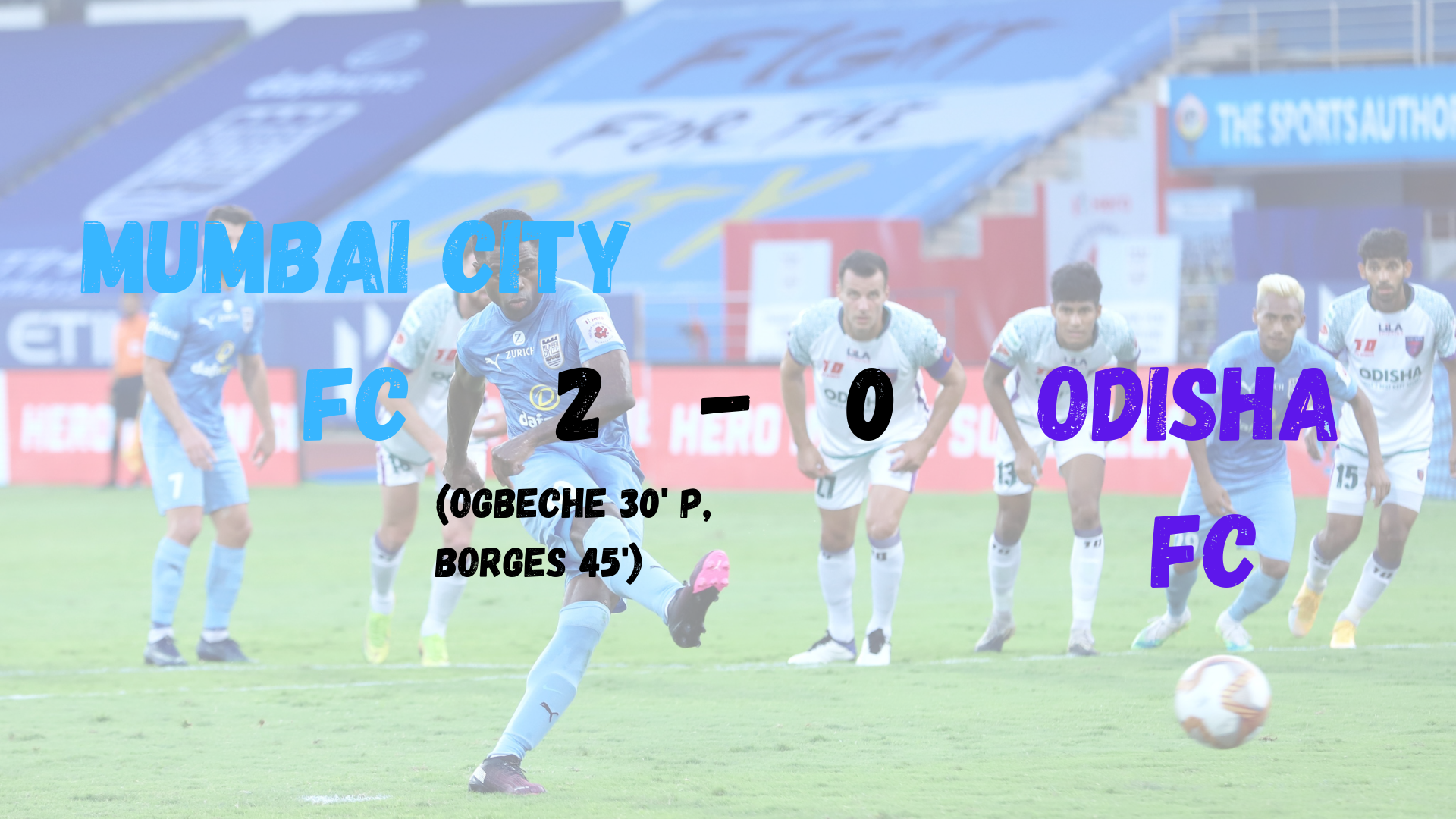 Now let’s look at the Lineup and Player Ratings

Mumbai made 4 changes from their 3-0 victory over the Red and Gold Brigades. But, Mandar was rested and didn’t come even for a minute. Santana was also rested for this match. Ogbeche was a surprising sight in the line-up. Cy Goodard started instead of Bipin on the right flank. The latter shifted to the left side in place of Mandar.

Amrinder – 7.5: The goalie kept his third clean sheet of the season. He did some pretty good saves to keep the attack of Odisha at bay.

Vignesh – 7.5: The young gun who is just 22 years of age. But proved to be vital to Mumbai both in the attack and in defense with his crosses and interceptions respectively.

Mehtab – 7.0: An okay performance for the man in defense. Helped team keep a clean sheet for a third successive time in the league.

Fall – 8.0: He almost scored from a corner in the 34′ but didn’t count due to the foul he made on the Odisha’s shot-stopper Kamaljit Singh who had to be substituted for the same. Overall impressive game as he would have scored two free headers which could have been a threat.

Rakip – 7.5: Once again trusted by Lobera to do the job and he didn’t disappoint even this time. He is just 20 and needs to continue and prove he could be the best in his position

Jahouh – 8.0: The Moroccan plays the game with such ease. He did made some rash tackles initially and should be careful for the same, serves just as the brain for Mumbai City FC. He had almost 1 Pass/Minute tonight.

Borges – 8.5: Probably the man of the match tonight. Impressive, impressive game for him tonight as he also bagged a header-goal to his name. His partnership with Jahouh just fits perfectly for Mumbai to break down plays and also build some of them.

Boumous – 8.0: This man has found his form now and threads magic with his feet. Good runs, good passes, made good space for the forwards and also dropped deep occasionally to make the play from the scratch. He could have a goal to his name but it considered to be a foul by the referee instead of an advantage.

Bipin – 8.5: He could really flourish under Sergio Lobera if he continues his form like this. He ran riots on the left flank, his crosses are improving game by game and it was his cross to Borges which led to Mumbai’s second of the night.

Cy Goodard – 7.5: He was quite busy to cause troubles for Odisha on the right flank. Good passes and runs tonight from him.

Ogbeche – 8.0: He fired a penalty from the spot in the 28′ to give Mumbai a 1-0 lead. He has hopefully got his confidence back and will surely rotate with Le Fondre for the remainder of the season.

Stuart Baxter made three changes to his starting line-up as it has been a hectic schedule for his team, after playing their third match in a week. George found his debut for Odisha FC in the place of young Hendry. Marcelinho was replaced by young AMF Daniel and Jerry was started on the right flank in place of regular Premjit. Who, did later came on as a substitute and had a chance to score but placed it quite wide.

Kamaljit – unrated: He had to be substituted in the 34′ due to his clash with Mourtada Fall from a corner. He was replaced by the backup goalie Ravi Kumar

Ravi Kumar – 6.5: The substitute goalie conceded a goal after eleven minutes into the game by a powerful header from Borges. An okay performance from a backup goalie.

George – 7.5: This guy had done his homework for tonight and was probably the busiest defender for Odisha to keep Cy Goodard and Rakip from providing crosses into the defensive box of Odisha.

Jacob – 7.0: He did made some good clearances for his team but needs to find the discipline in the defense if Odisha really need to win games.

Taylor – 7.5: Good interception, both grounded and aerially by the Englishman. Needs more work to get along with the team.

Shubham – 7.0: Though it was his hand-ball in the first half which led to the penalty but overall he did played quite well.

Bora – 7.5: the young lad was part of the defensive pivot along with South African Cole Alexander and majorly played in the holding position to break Mumbai’s attack.

Cole Alexander – 7.5: He did cause some break of plays of Mumbai to retain the ball and start Odisha’s attack.

Nandha – 7.0: The left winger did made good runs and had a good link up with George on the left. He did cause some but not enough problems for the Islander’s defense.

Daniel – 6.5: An okay game for the young Indian but couldn’t replace the game which could have been created by the Brazilian Marcelinho and thus was substituted later in the game.

Jerry – 7.5: He made goo runs and provided good crosses for Diego Mauricio in the box but unfortunately many were intercepted and cleared by Mumbai’s defense.

Diego Mauricio – 7.5: He could have had some scoring chances in the game but not enough supply was provided into the box for him. He had a frustrating game looking to provide some hopes to the fans as well as his team.

Marcelinho – 8.0: Even though he came on as a substitute for Daniel in the 57′, he managed to cause mayhem for Mumbai’s defense and was a real thorn for the opposition.

After the Lineup and Player Ratings, let’s look at the Story of the Match

Mumbai City FC started the game a bit slow than Odisha. Had anybody looked at the first 10-15 minutes of the game, they surely would have though that the match would be on Odisha’s side. Mumbai played as a team today again and could have had more goals in their favor. The full-back played really upfront while they had the ball and the center-back, Fall and Mehtab would take their position to make room for Jahouh, making it 3 in the back. Borges would cover Jahouh upfront in the holding position. Jahouh’s lethal pin-point passes makes it really easy for Mumbai to penetrate inside the opposition’s half.

During defensive actions, the defensive midfield pivot of Jahouh and Borges would almost always break down the attack of Odisha to start their own. The full backs would also rush to take their position and the only man to remain upfront in opponent’s half would be Boumous and Ogbeche or Le Fondre. As soon as they recover the ball, specially diagonal passes were made from Jahouh to feed the attacking runs of Mumbai.

GOAL 1: In the 28′, Mumbai got a penalty for Shubham’s hand ball, on the edge of right side of Odisha’s defensive box, as Vignesh was flicking the ball for Ogbeche. Ogbeche fired the penalty into the bottom left corner to make it 1-0 for Mumbai.

GOAL 2: In the 45′, Boumous made a run on the left flank to pass the ball to Bipin Singh. He fed the cross into the box of Odisha’s defense which was headed powerfully into the back of the net by Borges, who made an impressive run for the attack.

It was the 87′ when Marcelinho was about to score to make Odisha trail by just one goal which unfortunately glided past the left side of the net of Amrinder’s goalpost.

Odisha started the game pretty well and Mauricio even missed to give Odisha the lead in the 4′. They defended pretty well or they could have had more goals against them. The full-backs have to be more careful to prevent crosses. The team lacked players to whom the ball could be fed to strike goals. They looked quite frustrated and need to find their confidence back if they look to qualify for the play-offs.

Mumbai go at the top of the isl-2020-21 table with 9 points from 4 games. They had their third successive win of the season and same goes for the clean sheet for Amrinder. They have conceded just one goal that too in the opening match.

Odisha sit above bottom placed, league debutants SC East Bengal. Odisha have scored just 2 which came in the come-back against Jamshedpur and have conceded 6 to their name. They will surely look to improve for the upcoming fixtures.