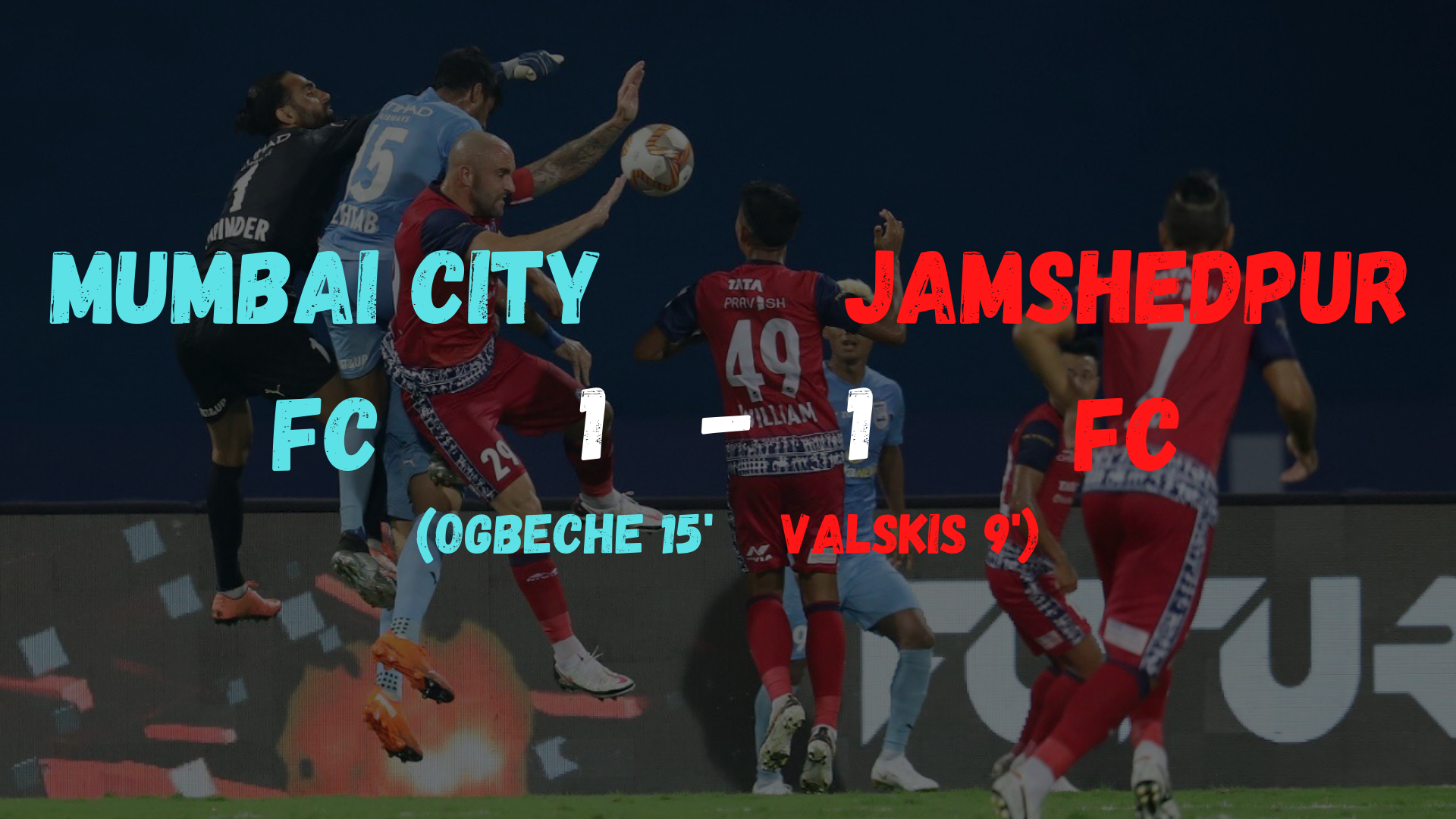 Let’s look at each teams Lineup and Player ratings after a short introduction to tonight’s match.

Sergio Lobera’s blue army gave some early warning signs to Owen Coyle and his team. They started the game pretty well, attacking the opponent’s half to take an early lead. Mehtab started instead of Hernan Santana and Rakip came on for Amey. The defensive midfield covering the center-backs was the same. Boumous missed the game due to some injury and Ogbeche was started to fill in the gap of Hugo Boumous. He played as a false nine. Bipin got his fifth straight start of the season and Cy Goodard was back too in the starting eleven. Le Fondre led the attack for Mumbai City FC.

Amrinder Singh – 7.5: He was pretty good today though not much saves were available to him as Jamshedpur were a man down for the majority of the game. But he did his job whenever needed.

Vignesh – 7.0: Not a bad game for a player who has been given the role of replacing the short-term absence of Mandar Rao Dessai. He was good with his crosses and also fine on his defensive actions.

Fall – 7.5: The Senegel center-back has been a good performer for Mumbai this season. From his clearances to his headers to try scoring goals, this man did all he could in tonight’s game.

Mehtab – 7.0: An okay game from the Indian center-back. But he needs to improve his game with regard to his position.

Rakip – 7.0: Was not accurate with the crosses he provided but was okay defensively. He was replaced by Amey in the second half.

Jahouh – 7.5: He was the regular man Mumbai looked to, for providing long range passes and through balls into the box. He tried twice to score goals from outside the box but both of them were unfortunately kept out by Jamshedpur’s keeper Rehenesh.

Borges – 7.5: He needs to improve his passing accuracy for his through balls. He positioned himself in a more deeper position than other games, as Mumbai had the resources of Le Fondre, Ogbeche, Bipin and Goodard upfront.

Ogbeche – 8.0: He deserved more goals from tonight’s game. He needs to find the net more often as he had a total of eight shot tonight. But was able to convert only two of them on target, out of which only one found the net.

Bipin – 8.0: This man has been doing the job for Lobera the way Jackichand did at FC Goa in ISL 2020-21. He is probably the most exciting Indian player to watch. His crosses were almost inch perfect and he also provided the assist for Ogbeche to cancel out Valskis’s goal.

Cy Goodard – 7.5: The 23yr old on-loan player has been impressive this season. His crosses are quite perfect into the box, his ability to turn the ball quickly and find players from even a shallow position has been capitalized upon by Mumbai.

Le Fondre – 7.5: The Englishman led the attack on the paper but played most of his game on the flanks, providing balls for Ogbeche and Bipin.

They had to keep Mumbai off the mark in the starting minutes of the game. But they did got a goal in the 9′ due to a an error by Mumbai in their own half.

Owen Coyle started with a 4-3-3 formation tonight. Kiran got his ISL debut by replacing Dinliana on the right-back. The midfield trio of Alex Lima, Monroy and Jamshedpur local lad Mobashir were there to control the game from the center of the park. Upfront was the regular striker Valskis. He had alongside him, the likes of William and Jackichand.

Rehenesh – 8.0: This man has been very very impressive for Jamshedpur FC this season. He has made so many crucial saves to prevent the opponent attack to find the back of the net.

Ricky – 7.0: He did a good job tonight to keep Goodard and Rakip from feeding balls into the box for their players.

Hartley – 8.5: He played for a perfect an of the match performance tonight. He was there at the right place in the right time for his team. From putting tackles to almost goal-line clearances, this man did it all for his team.

Eze – 7.5: His defensive partnership with Hartley has been an advantage for Owen’s team. He helped his team to prevent getting goals inside their net, even though they were a man down.

Kiran – 7.0: On his ISL debut, he played quite well but not a match a debutant, specially a full-back could ask for. His defensive actions were alright but his crosses were something, which should be improved.

Monroy – unrated: He got a red card in the 28′ which led to a drastic change of pace of the game, Jamshedpur were not planning for.

Alex – 7.5: He played a very good game tonight and certainly what the manager would have asked for. He dropped deep, collected the ball and fed them to the attackers up front. He did the job, Monroy would have done for the team.

Mobashir – 7.5: An interesting game from the young lad. He made wonderful runs and crosses on both side of the flanks. He swapped his sides with Alex Lima quite often.

William – 7.5: He was utilized in a good manner by Coyle, after their one man was down after just half an hour.

Jackichand – 8.0: His crosses and the inch perfect ball for Valskis in the opening ten minutes of the game allowed Jamshedpur to get in the front of the game.

Valskis – 7.5: He didn’t get the amount of chances he usually gets in a game. But, he capitalized on them correctly by being there in the right position and keeping the possession.

Mumbai started attacking from the first minute of the game. They looked favorites to take the three points home. They were on their four match winning streak and were looking to extend this stat further. Jamshedpur has did their homework and went according to the game plan their coach, Owen Coyle had given them.

Mumbai prefer to play on the wings and this allows them to leave a lot of space in the middle of the park. This was the chance Jamshedpur was waiting for and they had their chance in the 9′ of the game. Mumbai’s last man while they have the possession is Ahmed Jahouh, which allows the center backs to move in the full-back’s position. This further allows the full backs to push up front leading to higher scoring chances for their team.

GOAL: Ogbeche played a mis-pass in the middle of his own half, which allowed Jamshedpur’s right-winger Jackichand Singh to make a run for the mispassed ball. He got the ball across Mehtab Singh and played a soft, accurate tap-in pass for Valskis who made his run knowing the threat Jackichand possess from this kind of play. It was not the easiest but was surely one of many goals scored by last seasons Golden Boot winner.

But who knew, the lead Jamshedpur had taken was about to be equalized by Ogbeche within sixteen minutes.

GOAL: Le Fondre was threading magic on the left flank, to find Bipin on the edge of the box. Bipin played the ball simple and grounded to be found in the back of the net by Ogbeche, whose job as a false nine was accomplished by this goal.

Mumbai retain their place on the top of the table but gain a point after they fail to breach the defense of ten men of steel. They have played a game more and could loose their spot to defending champions ATK-Mohun Bagan if they register a big win in their next home game against FC Goa on Wednesday.

Jamshedpur FC now have gone unbeaten for straight five consecutive matches. Their problem to protect their lead, as they protect the ball from hitting the back of the net after letting the opponents equalize is still a concern. They sit sixth, six points behind leaders Mumbai City FC.