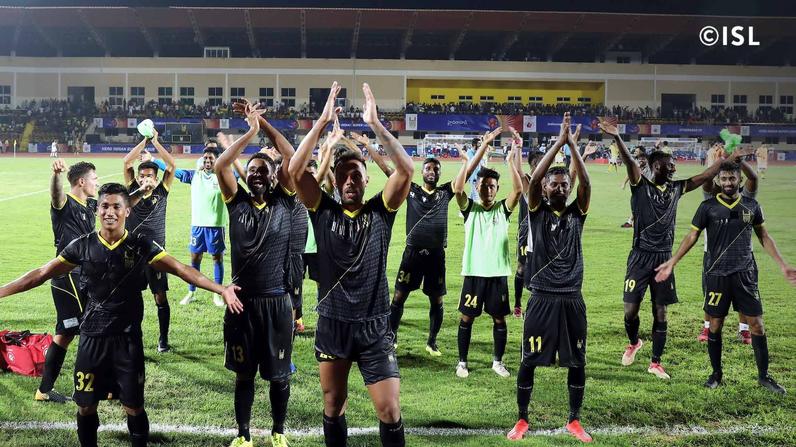 This week saw the two debutants, Odisha FC and Hyderabad FC register their first wins, David Williams scored the 1000th goal in ISL, there were some enticing draws on display and some comprehensive wins. The wrong decisions by the referees have been mounting since the beginning of this season which has left both the teams and fans frustrated.

Here is how the matches were played out this week:

NorthEast United’s young gun, Redeem Tlang scored two minutes into the game and gave the hosts a lead early on. After an enticing first half, the game still stood at 1-0 for the Highlanders, despite some close shaves on both sides of the goal. Once the second half resumed, Odisha continued to press, and finally at 71’ Xisco Hernandez equalized. Carlos Delgado was given a red card for his foul on Maximiliano Barreiro and brought Odisha down to 10 men. Ghanian Asamoah Gyan (85’) broke the deadlock and gave the lead to NorthEast.  They held on to the lead for another  9 minutes and took all the three points on offer. The win also took them to the top of the table.

It was a repeat of last year’s finalists facing off as FC Goa took on Bengaluru FC in Goa. After a goalless first half, Bengaluru’s Udanta Singh scored at the 62nd-minute mark, giving BFC a 1-0 lead. A rash tackle by Ashique Kuruniyan in injury time made the referee point to the spot and Ferran Corominas salvaged a draw for the hosts.

Jamshedpur FC won their second game in arrow beating Hyderabad FC 3-1. The hosts, JFC, dominated majority of the game and Farukh Choudhary(34’)gave them a lead after an attempt by Piti was saved by Kamaljit Singh. Hyderabad equalised close to halftime and Marcelinho lodged his name on the scorecard for the visitors. Once the second half resumed, a cross from Choudhary to Aniket Jadhav(62’) who went on to hit the back of the net, and later a brilliant goal from Sergio Castel(75’) all but sealed the deal for Jamshedpur.

ATK registers their second win this season after David Williams scored for them. It was also the 1000th goal in ISL. Chennai, on the other hand, missed quite a few chances and failed to score yet again. In the three matches they have played so far, they have not scored. The win took ATK to the top of the table. ATK was given the worse end of the refereeing stick with a wrong offside decision and two penalties denied. Regardless, they maintained the lead and won the match.

Mumbai city lost their first home fixture against the newcomers Odisha. The visitors took the lead as early as six minutes into the match and Xisco Hernandez put his name on the scoreboard. Aridane Santana then doubled the lead at 21’. To make matters worse for Mumbai, Jerry Mawhmingthanga made it 3-0 for his side in the 41st minute. Mohamed Larbi scored off a penalty after halftime to give the hosts some hope, but it went in vain as Aridane Santana(73’)got his second goal of the match. Bipin Singh also scored for Mumbai towards the end of the game, but the Islanders found themselves way too short of the target, Odisha took home their first points and a win under their belt.

In probably one of the best games played out so far, after a lot of back and forth, both NorthEast United and FC Goa shared spoils, with Goa grabbing a point by a whisker. Hugo Boumous scored first for Goa at 31 minutes. After missing a couple of chances, Asamoah Gyan made it 1-1 for NEUFC at 54’. There were some good saves at both ends and finally, Redeem Tlang (74’) broke the deadlock and scored for the NorthEast. The pressure started to show with things getting heated in the middle with a tackle and red card to Doungel later, Manvir Singh scored for 10-man Goa in injury time, snatching one point.

Hyderabad FC’s first match at home gave them a much-needed victory from behind against Kerala Blasters. Marcelinho and Rahul KP both had their chances for the hosts and the visitors respectively before Rahul KP managed to score for the Blasters with 34 minutes on the clock. There was better intensity from both teams post the goal, but at halftime, Kerala still had the lead. Hyderabad was awarded a penalty, and Marko Stankovic took it for the home team and equalised, and scored the first goal for Hyderabad in ISL. It was closely followed by another goal by Marcelinho who scored off a free-kick. The win gave Hyderabad their first win and points on board.