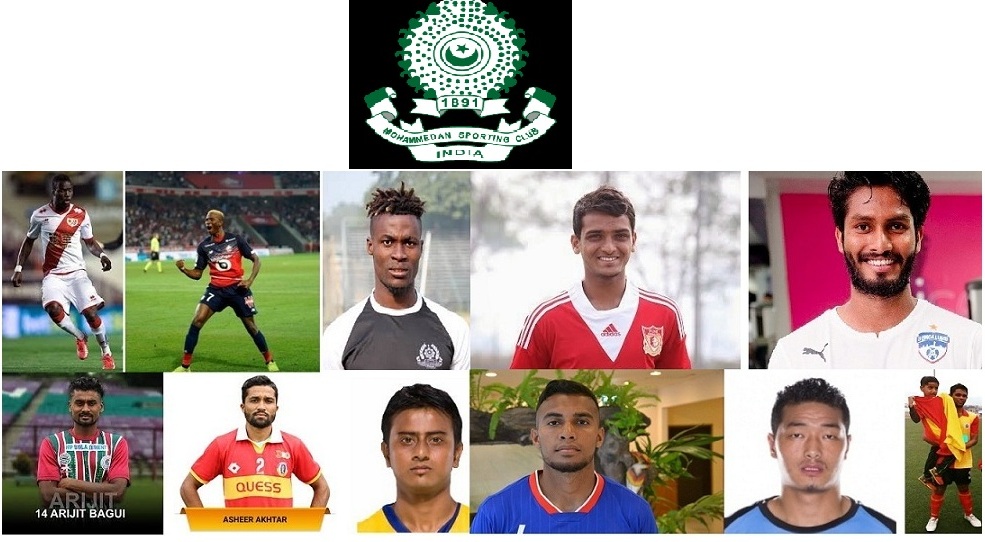 All eyes might be on ISL but no means least, Mohameddan Sporting is building a Strong side to put up a good show in the upcoming I League

Let us take a look at all the new Big Guns of the Black Panthers:

1.Mohammed Fatau
Playing position(s): Defensive midfielder
Born in Accra, Ghana Fatau joined Udinese Calcio in July 2010, 2011
Fatau was loaned to Cádiz CF
Following year he joined Segunda División B’s CD San Roque de Lepe also in a temporary deal.2013 Fatau made his debut with the Andalusians’ first team In 2014 Fatau moved to fellow league team Rayo Vallecano on loan, in a season-long deal.On 21 July of the following year he moved to UD Almería, also in a one-year loan deal.
2016, after rescinding with Granada, Fatau signed for Turkish Süper Lig club Gaziantepspor.
2 Raphael Ownrebe
Playing position(s): Striker
The Nigerian forward had been plying his trade in the Bangladesh Premier League since 2017 of Sheikh Jamal. In his maiden season in Bangladesh, he was the top-scorer of the league with 15 goals. He also had nine assists to boot.In the next season, he was snapped by Sheikh Russel FC. He continued his rich vein of form in his new stomping ground as well.

3.Philip Adjah
Playing position(s): Striker
Philip Adjah Tettey-Narh born in Ghana, Started his Career in India from playing Calcutta from Mohameddan Sporting where he score 31 Goals in 30 Appearances.
Then Signed by Calcutta Customs in Calcutta League where his double Strikes defeated EastBengal
Then moved to Neroca FC in I League , Came back to join BhawaniporeFC in I League Qualifier

Sayed joined the Pune F.C. Academy and played with the club in the youth I-League. In December 2016, He Jined  Minerva Punjab  in the I-League.He made his professional debut for the side on 17 January 2017 against Mohun Bagan. On July 31, 2019, he pursued a deal with Real Kashmir he will play in the I-League .

A Product of Tata Football Academy  Alwyn signed his first professional contract with Pailan Arrows in the I-League on 11 February 2012. The next day, Alwyn made his debut in the I-League against Dempo 2013 it was confirmed that George has signed for Dempo on loan from IMG Reliance Alwyn was named best young Indian player of the season for a second year running. Alwyn represented FC Goa during the 2014 Indian Super League on loan from parent club Dempo . In2015 former I-League champions Bengaluru FC announced the signing of Alwyn. He was called for India U23 team in June 2012, for the 2013 AFC U-22 Asian Cup qualifiers played his first game for under-23 team against Lebanon U23 on 23 June 2012 in the opening group match of AFC U-22 qualification.

Born in Nagpur district of Maharashtra, Akhtar started his career with the academy of I-League side Pune. After his time with Pune, Akhtar signed with I-League 2nd Division side Lonestar Kashmir and played the 2015–16 season with the club. Akhtar moved again to Salgaocar of the Goa Professional League. After the Goa Professional League finished, Akhtar signed with Mumbai of the I-League on 1 January 2017. In 2007, Akhtar was part of the India under-13 football team for the Asian U13 Football Festival.

The Present  Captain of Banaldesh National Football Team,  Jamal was playing for the Danish outfit Brøndby IF a t the age of 15,. He scored a goal in an important match against rivals F.C. Copenhagen (FCK).

2013, Bhuyan made his debut for Bangladesh national football team against Nepal in SAFF Championship, becoming the first non-resident player to represent the national side, became the MVP (most valuable player) in the Bangabandhu Cup where eight countries took part .He  created history by making Bangladesh qualify for the first time in the Asian Games’s knockout stage.

Started playing the game as a defender before being converted into a goalkeeper. Joined the Sports Authority of India Bhutia then represented his state of Sikkim in the 2010 Santosh Trophy at the age of 17.[1] He then joined Shillong Lajong in 2013. Was signed on loan by NorthEast United of the Indian Super League.[1] After returning from loan, Bhutia made his professional debut for Shillong Lajong in the I-League on 28 March 2015 .After the season, Bhutia went out on loan again in the Indian Super League, this time to Atlético de Kolkata After returning from loan and playing the 2015–16 season with Shillong Lajong, Bhutia signed with Calcutta Football League side Tollygunge Agragami

A  product of East Bengal F.C.’ youth system. In 2010 Manoj joined the North Bengal academy of East Bengal at Rajganj, He was the captain of the East Bengal U18 team and was a center back. In 2018 East Bengal head coach Alejandro Menéndez added him in the senior team squad for the 2018-19 I-League. Alejandro converted him from Centre Back to Left Back.