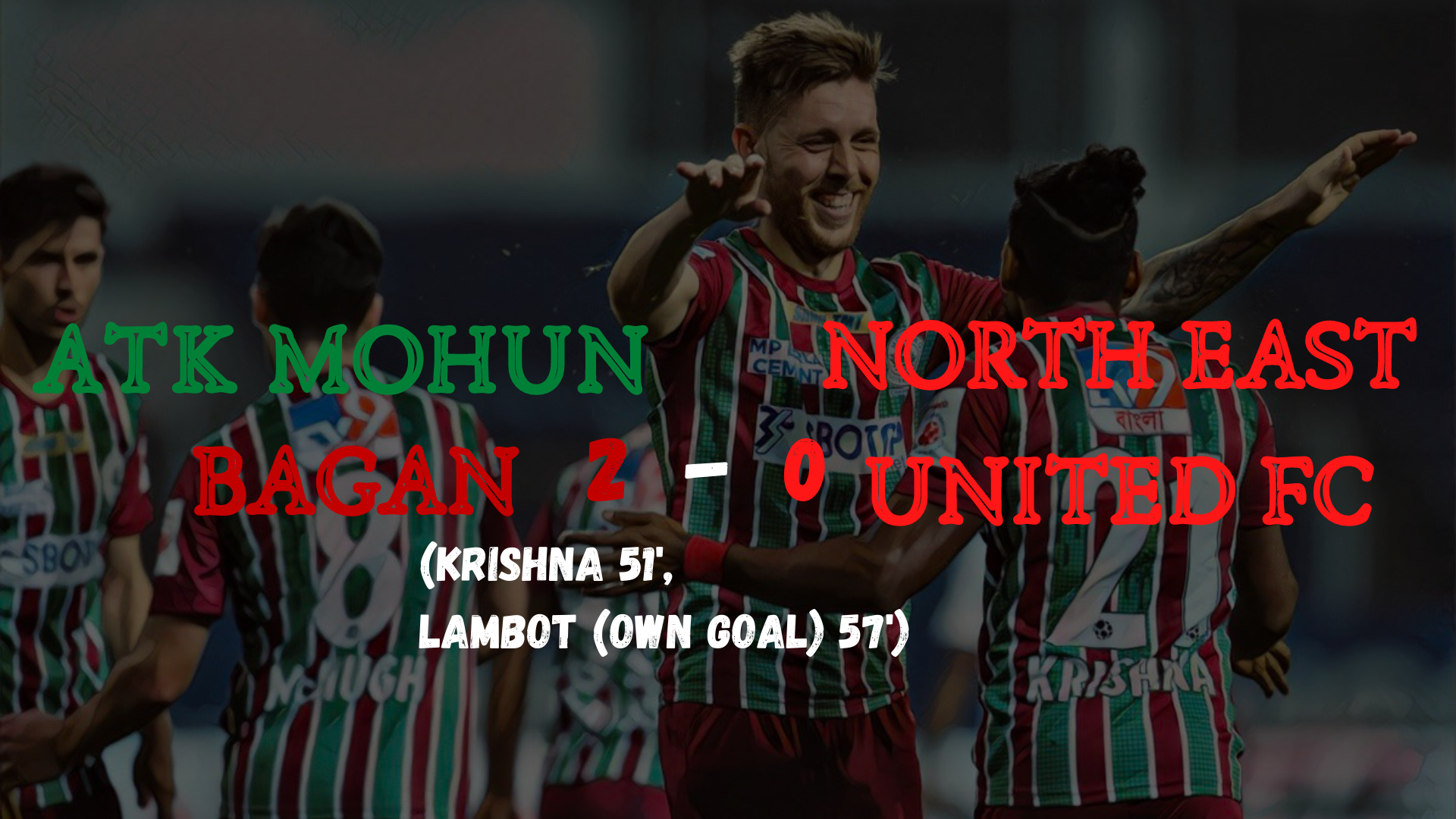 Two goals decide the fate of the match as North East United FC are handed their second loss of the season. Goal from Krishna and an own goal by Lambot was all it happened.

ATK Mohun Bagan had a slow start to the game. The first half certainly did not go their way. Prabir Das did have a good impact in the first forty five minutes, but they were unable to find the back of the net. Second half was more lively from the team, which saw them scoring two goals.

Arindam – 7.5: The captain got his seventh clean sheet in nine games. He wasn’t troubled much by the attack of North East United FC.

Tiri – 7.5: He not just managed to keep a clean sheet, but also provided an assist for the opening goal at Fatorda.

Jhingan – 7.0: The Indian defender had a good game tonight, giving NEUFC just one shot on target. He also tried to score in the 57′, which unfortunately went for an own goal by Lambot.

Kotal – 7.0: He had a good interchange of passes between him and Prabir. He attacked by going forward and helping the team deliver some crosses, most of which were unaccurate.

Subhasish – 7.0: Decent game from the guy. He did not participate in the attack in the first half, but bombarded forward to create some problems for Gerard Nus.

McHugh – 7.0: Covering the most distance on the field, he helped in team in both attacks and defense, whichever the need.

Edu Garcia – 7.0: He had a decent game tonight, showcasing his skills. But, his crosses were too low from set pieces, which improved in the second half.

Prabir – 7.5: Habas could unlock his attacking capabilities. He was deployed on the right wing this time, and he was seen getting inside the box to feed on the crosses delivered by his team.

SK Sahil – 6.5: Not the start the young man had looked for. He started his first game of the season, but failed to make a positive impact in the game.

Krishna – 8.0: The best player on the pitch. Not just for the goal he provided, but also the manner in which he takes part in the team’s buildup.

Williams – 7.5: He has developed a good relationship with Krishna on and off the pitch. Though he plays a bit behind Krishna, he is vital to the team.

North East United FC started the game with a lot of confidence and hope. But they did not get even a single shot on target, as ATK Mohun Bagan’s defense did their work right to keep NEUFC’s attack at bay. Absence of injured Appiah was surely seen. Sylla had a tough game, and things look worrying for NEUFC at the moment.

Gurmeet – 6.5: He needs to get on more with the defense, as there was very little communication and understanding between the players.

Fox – 7.5: He put some real hard tackles, did some good interceptions to keep the attack of ATK Mohun Bagan from scoring.

Lambot – 6.5: The captain didn’t had his night, as an own goal from him probably broke his team’s hope of returning back in the game.

Lakra – 7.0: He did manage to get hold of Prabir and Pritam on the left flank.

Ashutosh – 7.0: His presence did not make much difference in the team. He needs to get more involved.

Camara – 6.5: He missed the chance to prevent Krishna from scoring the opening header. The ball went past him behind to Krishna.

Apuia – 7.5: Probably the best player on the pitch for his side. He made timely tackles. Made some really good interceptions, breaking down opponent’s plays.

Gallego – 7.0: He tried to score a freekick, which went for the crossbar. He could have scored a goal as the ball did went past Arindam.

Rochharzela – 6.5: Did not make a massive impact in the game. Eventually was replaced by Ninthoi later in the second half.

Sylla – 6.5: Even though he tried a couple of chances on goal, none were sure chances to score. He is currently filling in the boots of absent Appiah.

Suhair – 6.5: He did not have a good game tonight. Needs to improve on his next game if given the chance.

ATK Mohun Bagan started the game with a 4-4-2, which was a slight shift from their earlier formation of 5-4-1. SK Sahil got his first start of the league, as Prabir Das was deployed on the right wing. The game started in North East United FC’s favour, but they couldn’t find the back of the net. Subhasish formed a back three with Tiri and Jhingan in the first half. His absence on the wings up front, obviously made it easy for NEUFC to prevent ATK Mohun Bagan only on the right side of opponent’s pitch. Williams played in the midfield, making it more of a 4-5-1 when the opposition had the ball. The game became more lively for ATK Mohun Bagan in the second half, when they pressed NEUFC high, which did made them conceded some corners.

North East had just Sylla up front when the opposition had the ball. They defended as an unit, still Habas’s men were able to penetrate through their defense from set-pieces, which the Highlanders were already conceding in number from the start of the game.

GOAL: ATK Mohun Bagan 1-0 NEUFC: Roy Krishna gave his team the lead in the 51′ when Tiri assisted the cross coming from the corner taken by Edu Garcia. It was a tricky goal, as Krishna had to wait for the right time to head the ball in the back of the net.

GOAL: ATK Mohun Bagan 2-0 NEUFC: An own goal by Lambot, again from a corner in the 57′, saw the hosts take a two nil lead over NEUFC. Jhingan did put Lambot in pressure, making him to cause that mistake, which eventually landed in his own net.

ATK Mohun Bagan take the top spot from Mumbai, after getting their sixth win from nine games. They face Mumbai City FC next on 11th Jan, which could surely decide the fate for the top spot.

North East United FC currently sit at sixth, after tasting their second defeat of the season. They have won just two, drawing a massive five matches this season.