“Scott Neville You saved us” chanted the Lal-Holud Fans !! 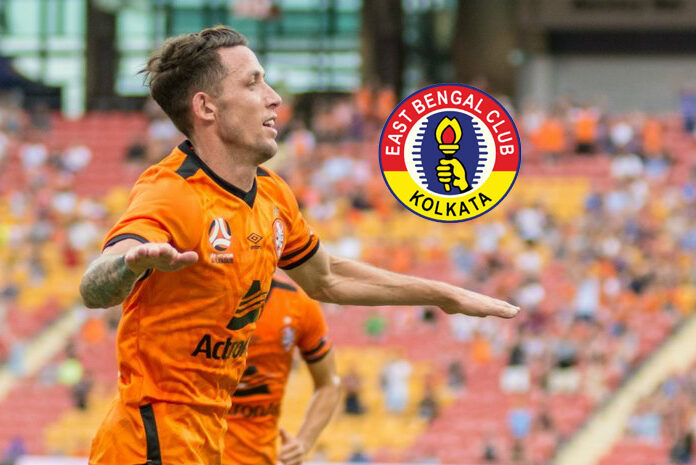 A dramatic ending to the breathless match. Scott Neville not only saved SC East Bengal’s defeat against Kerala Blasters by scoring a last-minute goal but also atoned for the mistake!

As Anthony Pilkington recovered, the experts kept the red-yellows ahead before the match against Kerala. But without him, Robbie Fowler made the first XI on Friday. Kerala coach Kibu Vicuna must have been happy even though the red-yellow supporters were disappointed to see it. His work became much easier.

Bright Enobakhare was kept in a vicious circle by the Kerala footballers from the very beginning. At least two Kerala footballers have been in the shadows with Ja Magoma all the time. This was not the end. Kibu assigned Jordan Murray, Gary Hooper, and Abdul Sahal Samad to storm the attack. The Kerala coach knew very well that the red-yellow defence would be in trouble as Raju Gaikwad was dropped at the last minute due to injury.

Kerala got a chance to go ahead within six minutes of the start of the game. Goalkeeper Debjit Majumder saved Jordan’s shot from inside the penalty box. SC East Bengal got the chance to score the first goal in 11 minutes. But Kerala goalkeeper Albino Gomes saved Harmanpreet Singh’s shot. In the 48th minute, he entered the box of Kerala with the ball and gave a bright pass to Harmanpreet. But he could not reach the ball. Kerala captain Jessel Carneiro was trying to get the ball out of danger and almost put it in his own goal. He quickly corrected the mistake and saved the ball from the goal line. Hooper’s shot missed the target in the 55th minute. Jordan put Kerala ahead in nine minutes.

In the first match against Kerala, the red-yellow team forgot to defend and scored a goal. The picture did not change on Friday. In the 64th minute, the Kerala goalkeeper aimed the ball at Jordan from his own box. The red-yellow defenders were not in place then. Kerala strikers Neville and Rana beat Gharami at speed and entered the penalty box. As Debjit was late in leaving the goal, the ball hit Jordan’s leg and went into the goal. After that, Fowler picked up Steinman and dropped Pilkington. The speed increases the attack.

At the very last moment of the match, the relief finally returned to red-yellow. Scott caught the ball flying from Bright’s corner with a header. He also kept the red-yellow unbeaten in six consecutive matches. However, as a result of the draw, SC East Bengal remained in the ninth position in the league table with 11 points in 11 matches.

Speaking at a virtual press conference after the match, the red-and-yellow coach said, “It’s a disappointment not to win, but there are several positive aspects to this match as well. I was able to bring equality in the last minute. I could have lost three points, but it didn’t. After they scored, our team lost its balance. We have played three tough matches in the last six days. Maybe that’s why our footballers weren’t found in the normal rhythm. However, the team played brave football. That’s the decent thing to do, and it should end there. “

Like the coach, SC East Bengal captain Daniel Fox also admitted that they did not play well on Friday. “We didn’t play well,” Fox told ISL Media. After letting them stay ahead for so long, we had to save the rate at the last minute. We felt the carbon copy of the first match. Only that time we were ahead, they equalized at the last minute. This time the opposite happened. We deserved to win that match. They were supposed to win this match. I’m disappointed. It’s better to get one point. “

673 thoughts on ““Scott Neville You saved us” chanted the Lal-Holud Fans !!”