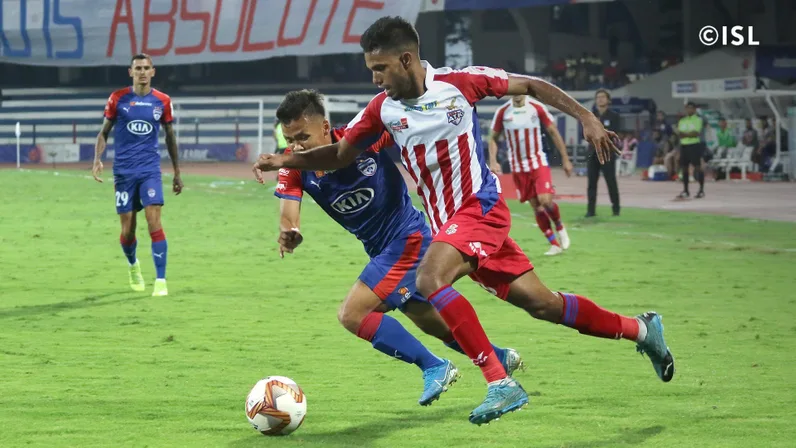 When the two former champions meet at the Salt Lake Stadium tonight to book their place in the final, it is going to be a battle of the brain behind the team as well. Both ATK’s head coach Antonio Lopez Habas and his Bengaluru FC counterpart Carles Cuadrat, prefer to have a good balance between attack and defence rather than an all-out attacking approach.

BFC come into this match with a slender one-goal advantage from their first-leg win over the Kolkata side when they met in Bengaluru. A goal that came off the boots of Deshorn Brown, who capitalised on the defensive error by the goalkeeper.

While this goal, will give a head start for BFC this time around, ATK is likely to see it just like that: an aberration. They have had the second-best defence in the league with nine clean sheets, behind the Bengaluru outfit who have eleven, and a potent attack boasting the likes of Roy Krishna, David Williams, and Edu Garcia. They will look to score some early goals to put the pressure on BFC, Habas echoed the same in the pre-match conference, “They are a defensive team. Their defence has done well this season. If we score in the first minute, they cannot be defensive.” He added, “We have to try to get more goals than the opponent. It is simple. I think it is very important to score goals, but even more important to not concede.”

A thinking Cuadrat would also agree to, BFC has been solid at the back this season, and Juanan, Albert Serran and Nishu Kumar have been the stand out performers at the back. But the Blues will be without the services of Nishu Kumar who picked up a red card in the previous game, and Serran is also likely to miss out due to an injury.

Compounding their worries, the attack for Bengaluru has been lackadaisical, Udanta Singh and Ashique Kuruniyan have not fared as well as they were expected to, and mid-season signing Deshorn Brown has impressed but would have to find the back of the net more regularly if BFC would like to take the match to ATK.

Sunil Chhetri with 9 goals from 16 games may be the highest Indian goal scorer, but he is believed to have not completely recovered from a hamstring strain, this will just add to Cuadrat’s woes. The one little thing he can rest easy on is youngster Suresh Wangjam, who has been a toast of the town in Bengaluru. A lot will rest on his young shoulders along with Erik Paartalu and Dimas Delgado in the midfield.

ATK, on the other hand, have a pretty good balance both ways, Krishna, Williams and Garcia have done the bulk of the scoring, and Michael Soosairaj and Jayesh Rane have handled things quite well in the middle for Habas. Pritam Kotal, John Johnson along with Sumit Rathi have managed to keep nine clean sheets with goalkeeper Arindam Bhattacharya also doing well. They may not be tested too much, given how Cuadrat’s tactics and Bengaluru attack has shaped up recently, BFC will not be expected to go for an all-out attack approach, especially with a one-goal cushion, they might just try to score an early goal, and sit back to defend.

For Bengaluru FC it is their third successive playoffs, for ATK, their last one as a sole entity before they merge with Mohun Bagan. Both teams have had setbacks in Asia so to speak, BFC failed to make it to the group stages and ATK who were expected to top the table to get the much-coveted AFC Champion’s League slot, had one slip-up against Chennaiyin to lose out on it. With not only the ISL trophy but also the AFC Cup slot on the line, they will both be eager to make amends.

It should be an interesting game to see which of the Spanish coaches’ game plan works better, and it might just be a case of who blinks first.